We use cookies to provide you with a better experience. By continuing to browse the site you are agreeing to our use of cookies in accordance with our Cookie Policy.
Skip To Content
Home » Japan’s booming pet market is an opportunity for US exporters

Japan’s booming pet market is an opportunity for US exporters

This data comes from a voluntary report recently released by The US Department of Agriculture (USDA) Foreign Agricultural Service (FAS) and the Global Agricultural Information Network (GAIN). The report provides a detailed picture of the Japanese pet food market and the state of US pet food exports to the country.

Thailand leads the US in terms of pet food exports to Japan with 33% of the market, and France follows close behind the US at 16%. These three exporting countries combined make up roughly 65% of Japan’s total pet food imports in 2019.

Pet food sales in the country exceeded $3 billion in 2019, driven by value-added products, premium and super-premium foods, medical and therapeutic functional formulas, and a growing variety of pet treats and supplements. This represents 3.5% growth from 2018 and marked the fourth year in a row that pet food sales have increased. Volume sales of pet food declined less than 1% between 2018 and 2019, remaining steady at roughly 594,000 metric tons and illustrating across-the-board price increases for pet food products. 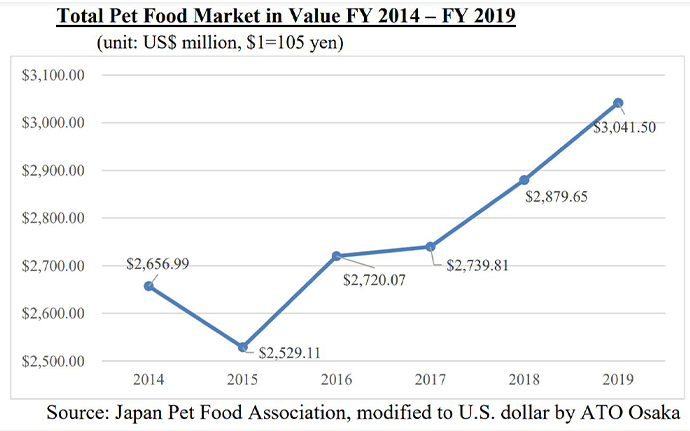 These increases in semi-moist and wet pet food sales represents a global shift toward wet diets and nutritional products for dogs and cats alike. 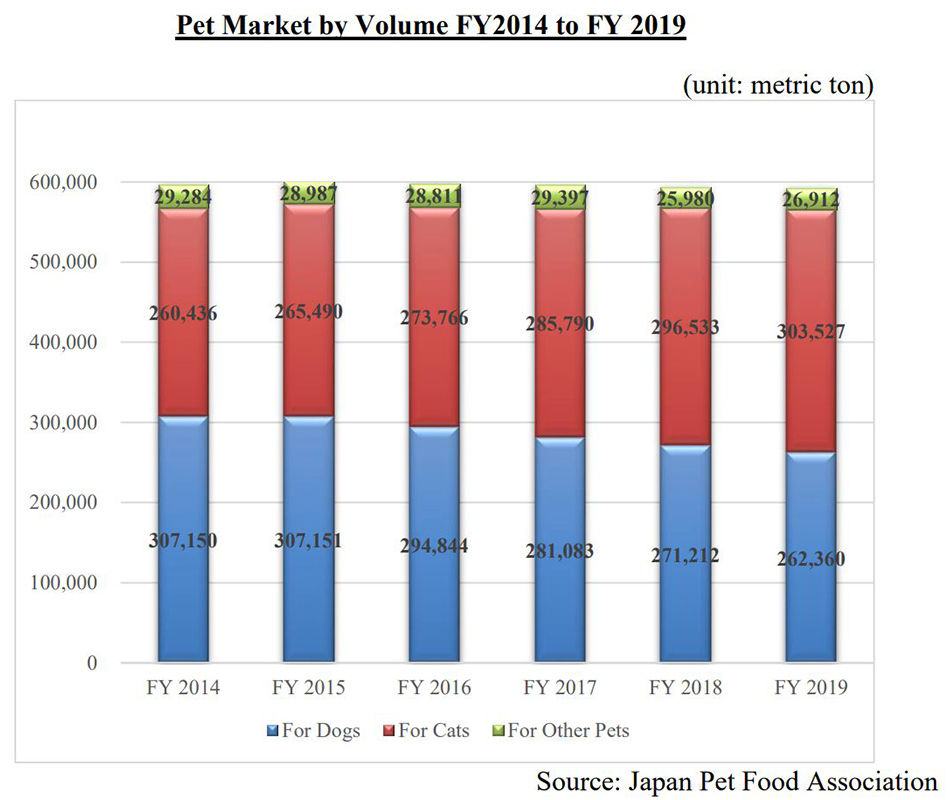 According to the report, the population of dogs and cats in Japan (18.13 million) outnumbers that of children 15-years-old or younger (15.3 million). This was attributed in part to the COVID-19 pandemic, during which time the number of new pet owners increased.

However, the report states that the overall pet population in Japan is declining, as the decreasing dog population overshadows the increasing cat population. This shift began in 2017, with the population of cats growing past the population of dogs for the first time since 1993, when the Japan Pet Food Association began collecting pet ownership data.

As of October 2020, there were 8.5 million dogs and 9.6 million cats living in Japanese households.

The life expectancy of dogs in japan is 14.5 years, and the life expectancy for cats is roughly 15.5 years. This is attributed to the fact that 84.7% of dogs and 90.4% of cats are kept indoors year-round, resulting in reduced risk of sickness.

Japan’s four most popular dog breeds in 2020 were Toy Poodles (13.1% of the total dog population), Chihuahuas (12.8%), Shibas (11.8%) and Miniature Dachshunds (11.3%). These breeds have been the top four most-popular since 2016. They are all considered small breeds, which tend to be easier to care for in highly urban environments compared to larger breeds.

On the feline side, a majority (75.5%) of cats are crossbreeds, followed by American Shorthairs (4.8% of the total cat population) and Scottish Folds (3.4%).