We use cookies to provide you with a better experience. By continuing to browse the site you are agreeing to our use of cookies in accordance with our Cookie Policy.
Skip To Content
Home » The top global markets for US pet food exports in 2020

The top global markets for US pet food exports in 2020

WASHINGTON, D.C. — The United States Census Bureau recently released global dog and cat food export numbers for 2020, revealing the top countries and markets by percent growth and dollar value, as well as areas where those exports declined compared to 2019.

Overall, US pet food exports increased 5.6% across all regions compared to 2019, amounting to roughly $1.7 billion.

The top 10 global markets for US dog and cat food exports in 2020 were: 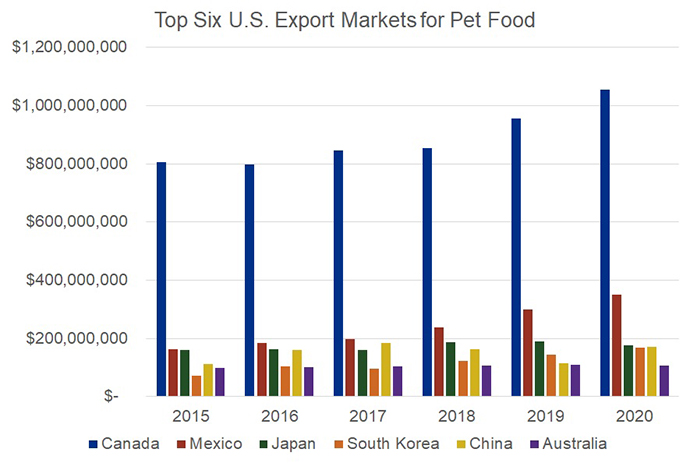 The largest regional value increase occurred in North America, in which the United States exported $943.5 million worth of pet food to Canada and Mexico. Exports to this region were up 10.5% from 2019.

Growth came from the Canadian market, which imported 12.1% more US dog and cat food products than in 2019, while US pet food exports to Mexico declined 1.4% in 2020.

By country, US pet food exports to France grew the most by percentage compared to 2019, increasing 456.4% to $10.1 million. Although it still represents a much smaller export market for the United States, exports to Finland came in at a close second in terms of percent growth, increasing 443.4% to $473,930.

US pet food export increases to China seen in 2020 were helped along by a Phase One trade agreement between the two countries, in which China is obligated to purchase $200 billion worth of agricultural products — including pet food — as well as manufactured goods, energy resources and services from the United States between Jan. 1, 2020 and Dec. 31, 2021. 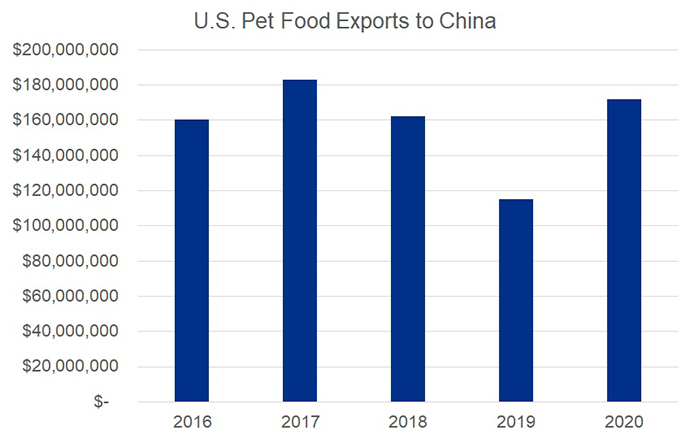 Early in 2020, China lifted its ban on pet food products containing ruminant and poultry ingredients. Later in the year, the US Department of Agriculture’s (USDA) Animal and Plant Health Inspection Service (APHIS) created a streamlined protocol for pet food exports to China, which went into effect Aug. 15.

According to Gregg Doud, former chief agricultural negotiator with the Office of the United States Trade Representative (USTR), US export data shows October and November 2020 were the “two biggest months of all time for ag exports to China,” which includes pet food exports.

Japan remains the second-largest single-country market for US pet food exporters. This growing market reflects many Western pet food and treat trends, including premiumization, function and overall sales growth, making it a key opportunity for US dog and cat food exporters.

In March 2021, Russia announced it will no longer accept pet food, animal food or feed ingredient imports from the United States. US pet food exports to Russia totaled $2.8 million in 2020, up 10.4% from 2019.

The United States continues to experience port congestion on the West Coast, which has affected both imports to the United States and agricultural exports coming out of the country. Port authorities are optimistic that congestion will ease this summer, but warned the situation is likely to ramp up again in August with the approach of winter and the holiday season.

On the bright side, domestic organizations are streamlining market access tools and export rules for United States vendors. In December 2020, AFIA received $200,000 in funding “to increase global access of animal food products manufactured in the United States” through the USDA’s Market Access Program (MAP). 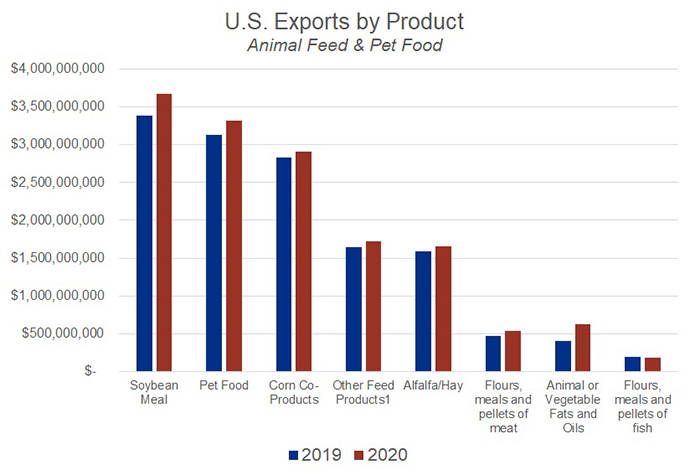 Shortly after in January 2021, PFI announced its support for the expanded MAP with plans to help promote awareness of international demand for US pet food products and reduce trade barriers. The 2021 MAP now includes Brazil and South Korea, two new countries joining the Caribbean (the Bahamas, Turks and Caicos, Jamaica, and Trinidad and Tobago), Central America (Costa Rica, El Salvador, Guatemala and Panama), China, Columbia, Mexico, the Middle East (Israel and the United Arab Emirates), the Philippines and Taiwan.