We use cookies to provide you with a better experience. By continuing to browse the site you are agreeing to our use of cookies in accordance with our Cookie Policy.
Skip To Content
Home » Global pet food production up 4%, overall feed falls 1% in 2019

NICHOLASVILLE, Ky. — Overall animal feed production fell 1% from 2018 to 2019, although pet food production was up 4% globally and increased by double-digits in some regions, according to Alltech’s 2020 Global Feed Survey.

Dr. Mark Lyons, president and CEO of Alltech, on Jan. 27 presented results from the company’s ninth annual Global Feed Survey, which draws data from 145 countries and approximately 30,000 feed mills around the world to provide an in-depth look at the global animal feed and pet food industries.

“2019 presented extreme challenges to the feed industry, with one of the most significant being African swine fever. The regional and global implications are reflected by the Alltech Global Feed Survey and the decline in global feed production,” said Lyons. “…The damage caused by ASF will have long-term implications, and we expect that the top protein sources will continue to shift as our industry adapts to the shortage.”

North America and Europe are neck-and-neck for the highest pet food production, both at 8.8 million tonnes in 2019. However, this production rate for Europe represents a 3% increase from 2018, while North America’s growth rate was flat. 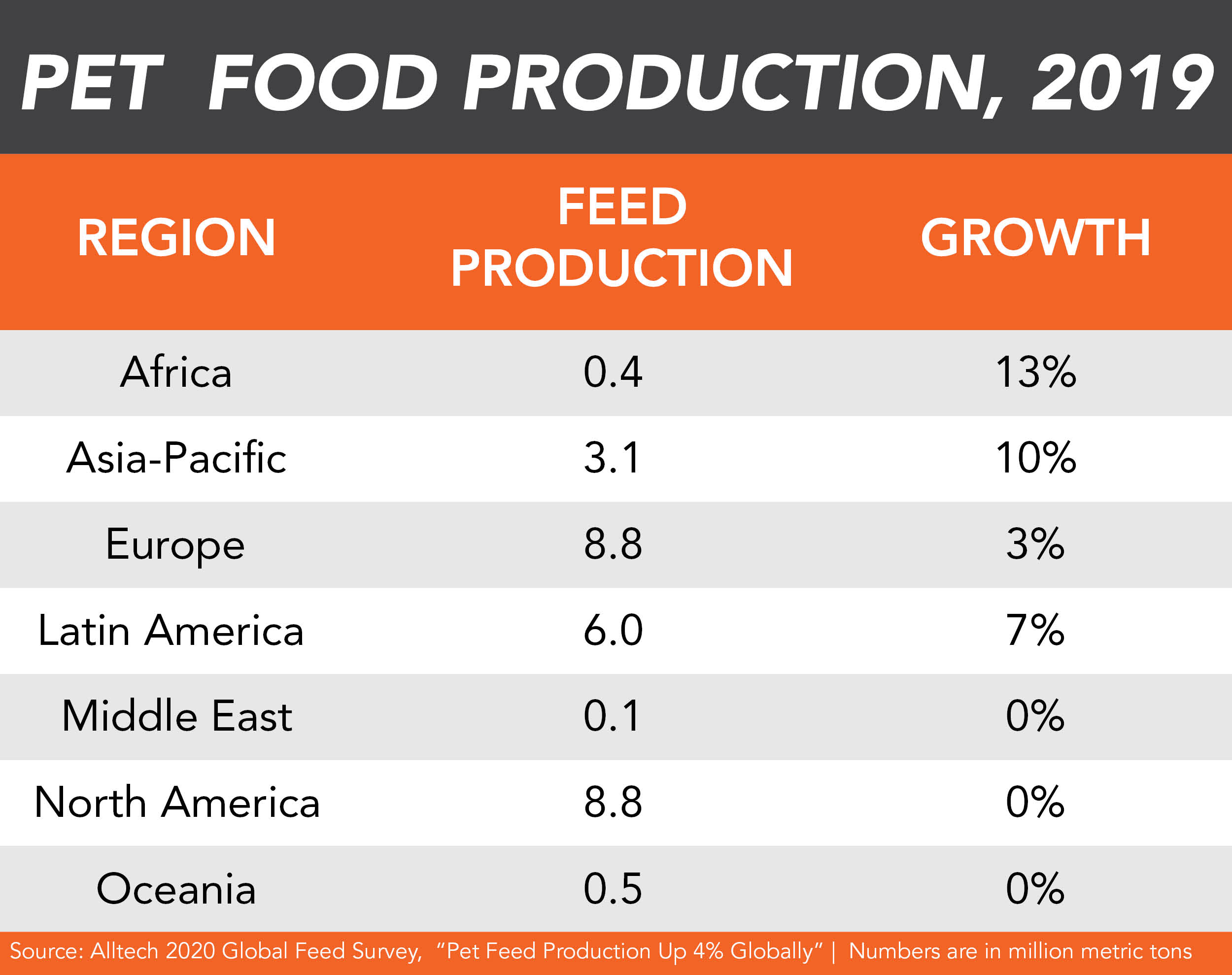 The Asia-Pacific region produced the largest tonnage increase from 2018 to 2019, up 10% and totaling 3.1 million tonnes with China and Indonesia leading that growth. China produced 588,000 tonnes of pet food in 2019, while Indonesia produced 720,000 tonnes.

In 2018, pet food production growth in the Asia-Pacific region was led by Indonesia, Taiwan, Thailand and Sri Lanka.

Latin America also experienced a notable tonnage increase from 2018 to 2019, producing 6 million tonnes of pet food at a 7% growth rate. The region bounced back from production declines in 2018, according to Alltech’s 2019 Global Feed Survey. Tonnage increases in 2019 were led by growth in Ecuador, which produced 180,000 tonnes of pet food in 2019, and Argentina, which produced 710,000 tonnes.

Europe produced 279.2 million tonnes at 0.2% growth, but all other regions saw a decline of at least 1% in feed production in 2019. This includes the Middle East with a 5.8% decline; the Asia-Pacific region with a 5.5% decline; and Oceania with a 1.3% decline.