FEDIAF quantified the impact of the pet food processing industry in its latest report, “Facts & Figures 2019.”

“We are delighted – although not surprised – to read this positive pet data,” said Thomas Meyer, secretary general of FEDIAF. “Pets are wonderful companions and enhance our lives in so many ways. In addition to offering unconditional love and companionship, science has proven the numerous ways pets are good for our health.”

Note: Euro to USD conversions are based on July 1, 2020 exchange rates.

Pet food sales in 2019 remained relatively unchanged from 2018 revenue, according to historical data from FEDIAF.

“During recent months, we have faced unprecedented challenges to our physical and mental health,” Meyer continued. “Through these tough times, 85 million European households / 195.5 million people will have been grateful for the love their pets provided.”

Additionally, an estimated 8.5 million tons of pet food are produced each year in Europe. 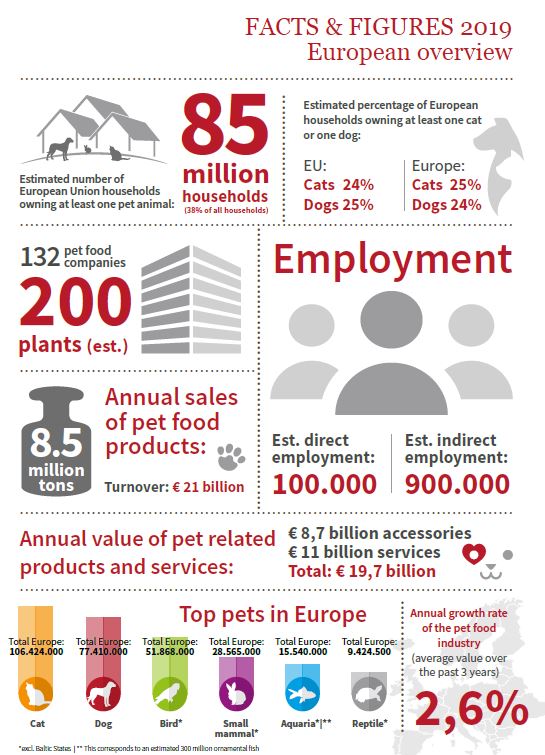 FEDIAF estimated the annual growth rate for its pet food processing industry in 2.6%, based on the average growth over the last three years.

“The term ‘pet’ has frequently been replaced by ‘companion’ over recent years, with their value recognized throughout the world,” commented Joeri Van den Bergh of InSites Consulting. “Moreover, it is clear that pet owners have no intention of cutting back spending on their companions…Our latest research at InSites shows that we care for them as members of the family.”