LEXINGTON, KY. — Pet food was regarded as one of the few sectors of global feed production to benefit from the COVID-19 pandemic, according to Alltech’s 10th-annual Global Feed Survey. This recession-proof sector — especially the European, North American and African pet food markets — drove 8% growth in global pet food production in 2020.

The 2021 Global Feed Survey represented feed production across 142 countries, as well as a quantitative and qualitative survey of feed industry companies regarding challenges and trends seen over the last year.

“The year 2020 was challenging for many industries – and certainly, the feed, agriculture and food industries were no exception,” Alltech stated in the report.

Globally and across all categories, feed production grew 1%, totaling 1.188 million metric tons, in 2020. 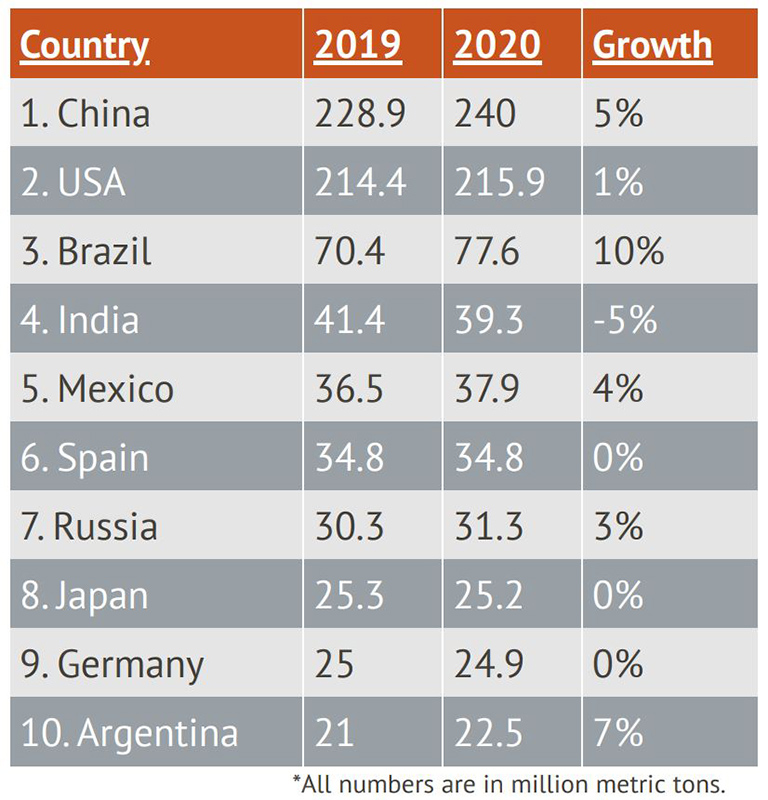 These top 10 countries were responsible for 63% of total global feed production in 2020 with a combined average growth rate of 3%. Interestingly, the average feed costs in these 10 countries were 9% lower than the global average, Alltech shared.

“The pet industry was one of the few industries that reaped benefits from COVID-19 and the related lockdowns, with pet adoption rates soaring,” Alltech stated in the report. “As a result, the pet food industry experienced its largest growth in the past three years. Premium pet foods continue to see growth, although economic conditions also allowed for an increase in the purchase of lower-cost feeds as well.”

Europe posted the largest pet food production growth in 2020 at 14% over 2019, totaling 9.36 million metric tons produced in 2020. The United Kingdom, France, Spain, Turkey and Belgium were cited as the primary growth contributors in the region.

Alltech noted an increased interest in alternative ingredients, such as insect proteins, in the pet sector, although some countries still have not approved the use of insect-based ingredients in animal feed products, including the United States.

Additionally, Alltech provided pandemic-era insights regarding global feed production as part of its Global Feed Survey as well. Roughly 59% of ingredient suppliers surveyed said they were moderately or significantly affected by the COVID-19 pandemic, and 85% reported the price of ingredients impacted the industry.

“Our survey showed that, regionally, COVID-19 had varying effects,” Alltech stated. “Some regions, such as Africa, cited more challenges than others, and in many cases, this was a country-by-country determination.”

Additionally, 77.4% of those surveyed reported moderate or significant increases to e-commerce last year.

“The rise in e-commerce was seen around the world and is expected to be an ongoing avenue for food-purchasing into the future,” Alltech stated.