BRUSSELS — The European market for pet food has grown 2.8% to €21.8 billion ($26 billion USD), according to the European Pet Food Federation (FEDIAF)’s latest annual report. The association released its pet population and market overview on June 21, highlighting pet ownership data and how it relates to pet purchasing across Europe.

Roughly 38% of all households in the European Union own a pet today, a total of 88 million homes. Among these households live approximately 81 million cats, 71 million dogs and roughly 1 billion other companion animals, including 52 million birds, 30 million small mammals, 15 million fish and aquaria animals, and 9 million reptiles. Across all European households, there are more than 110 million cats and 90 million dogs. 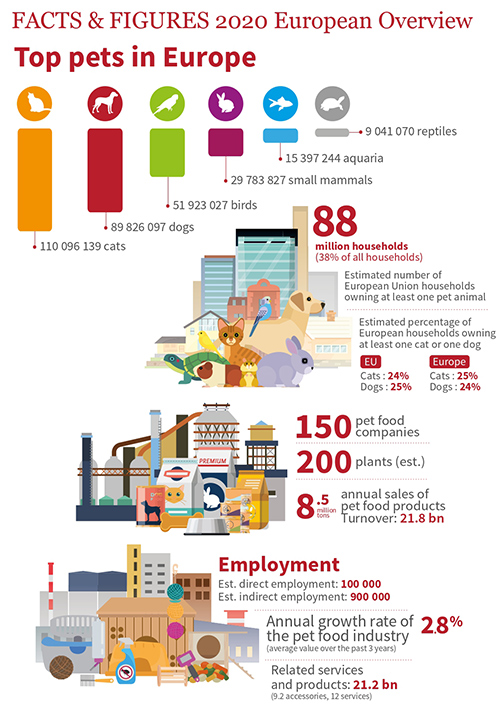 Poland and Romania have the largest estimated percentage (42% each) of European households owning at least one dog or cat.

“2020 was an extremely challenging year,” said Raquel Izquierdo de Santiago, secretary general of FEDIAF. “At a time when so many of us were concerned about our health and faced social restrictions, it is reassuring that 88 million European households, approximately 202.4 million people, benefitted from the love and companionship of a pet.

“In addition to this much-appreciated friendship, research has proved that animal ownership has alleviated some of the detrimental psychological effects of lockdowns and social restrictions,” she continued. “Research undertaken during the pandemic has shown 74% of pet owners believe their pet has helped their mental health and 86.5% agreed their animals had provided emotional support."