We use cookies to provide you with a better experience. By continuing to browse the site you are agreeing to our use of cookies in accordance with our Cookie Policy.
Skip To Content
Home » Using lactic acid to control Salmonella in raw dog food

Kiprotich was one of three graduate students selected by AFIA to share his research during the annual conference. He is supervised by Greg Aldrich, Ph.D., research associate professor and pet food program coordinator at KSU. The research he shared at the Pet Food Conference was supported by Balchem Corporation. In his research, Kiprotich looked at how encapsulated and dry-plated organic acidulants can be used to control Salmonella, a common foodborne pathogen, in raw meat-based dog foods.

“As of today, AAFCO defines raw diets as a feed or feed ingredient derived solely from plants, animal or mined sources, but this is the key part: all these products have to be in the unprocessed state,” he explained. “And so raw diets are not heat processed, they're not rendered, they're not frozen, they’re not purified, extracted, hydrolyzed or fermented. And yet, the common ingredients that we use for making raw diets are ingredients like meats, vegetables, fruits, poultry, eggs, organ meats – and all these ingredients that we use for making raw diets are notorious for contamination. Some of them inherently come with pathogens.”

Kiprotich noted that current methods of achieving kill steps for raw diets, such as high pressure pasteurization and irradiation, can be costly. The purpose of his study is to find a more inexpensive way to control foodborne pathogens, looking specifically at organic acids such as citric acid and lactic acids.

When incorporated into a raw meat-based pet food formula, organic acids can “shock” the product, causing discoloration and syneresis, Kiprotich explained. Encapsulating the organic acid, or coating it with edible vegetable oil, would allow it to be released more slowly into the product, “giving us the antimicrobial protection that we want without damaging the product,” he said.

Kiprotich’s study was conducted in two parts over a 22-day storage period: one to determine the efficacy of encapsulated and dry-plated lactic acids in controlling growth and survival of Salmonella enterica in a raw pet food, and another to monitor pH progression to measure acidity.

The experiment included two types of lactic acids — encapsulated and dry-plated — and three treatment levels for each acidulent: 1%, 2% and 3%. Two control diets formulated without acidulants were used, in which the positive control was inoculated with Salmonella, and the negative control was not inoculated. 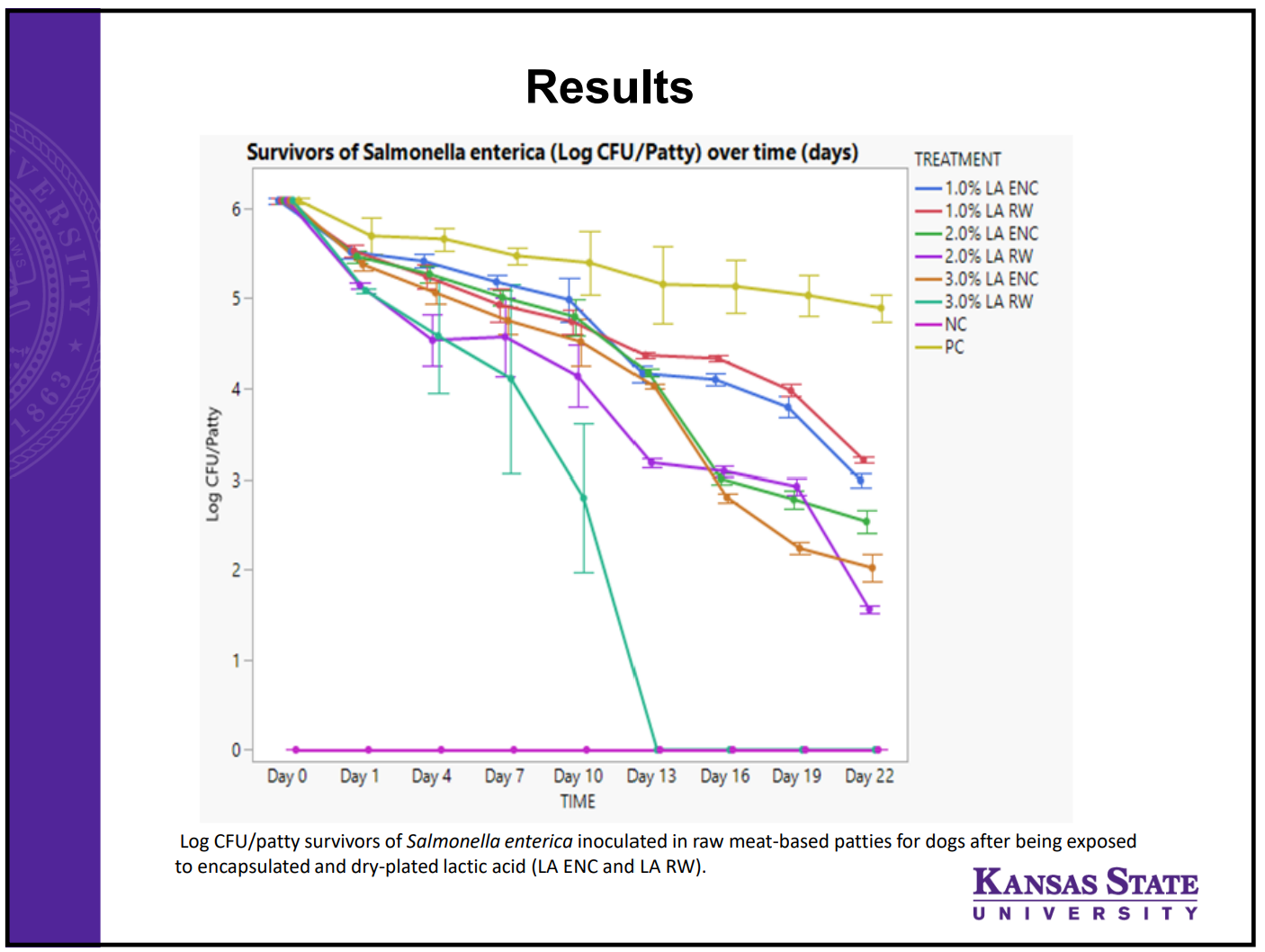 “At higher concentrations, the raw lactic acid seems to be more efficient than encapsulated lactic acid,” Kiprotich said. “But here's the problem, here's the catch: are we going to kill the pathogens and damage the product, or do we want something that is holistic, that, at the end of it all, we have a product that can actually be sold in the market.”

In essence, the diets formulated with dry-plated or encapsulated lactic acids appeared to reduce Salmonella count by more than what was seen in the inoculated positive control diet, although each inclusion level and acidulant type yielded different decreases in the pathogen.

In measuring the pH progression of each diet, the study clearly showed the dry-plated lactic acid diets caused a more dramatic shock to the product compared to the diets with encapsulated acidulants. After just 24 hours, Kiprotich observed, the diet with 1% lactic acid changed color dramatically, and not in a favorable way. 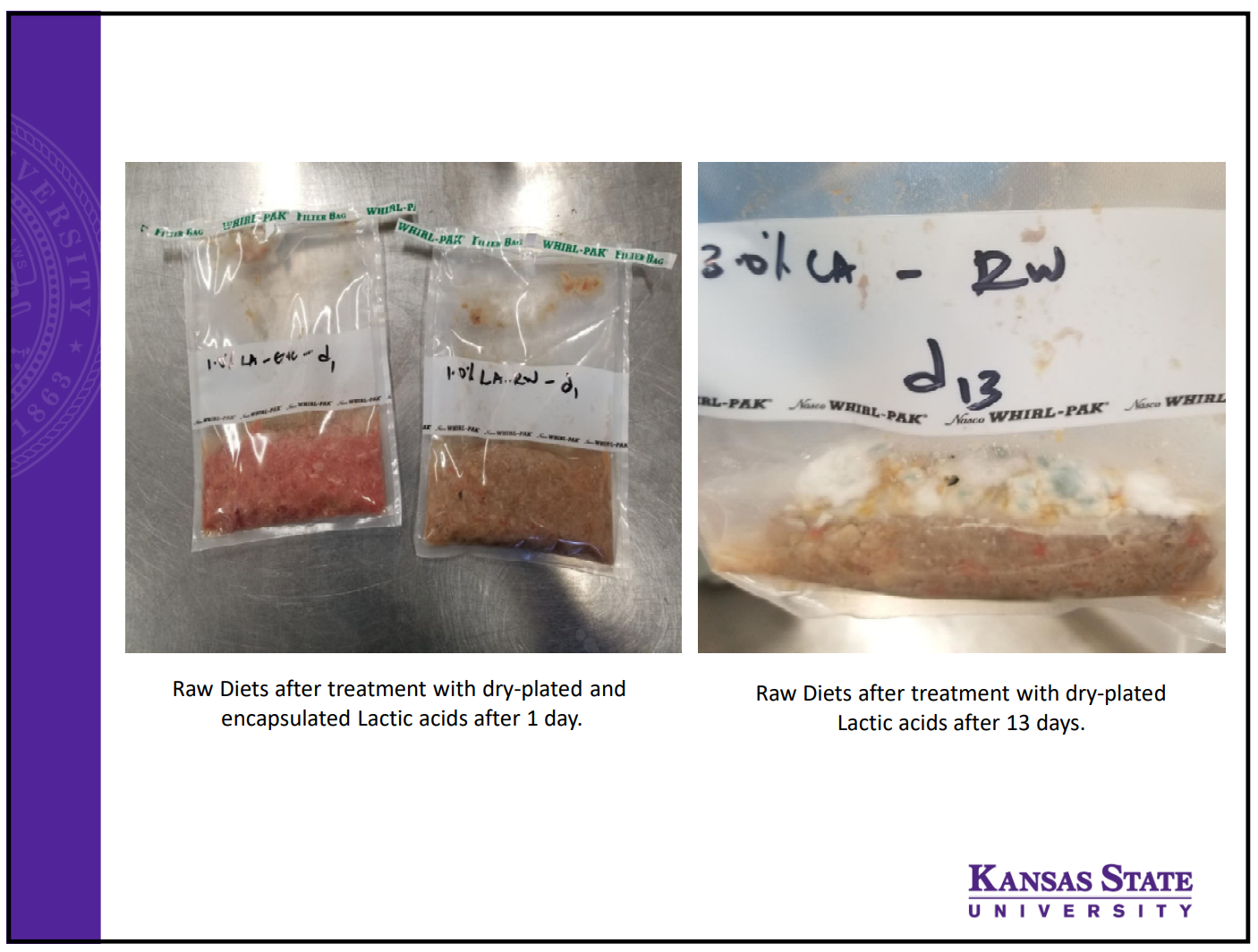 “I don’t think anybody wants to feed a dog something that looks like this,” Kiprotich said.

This discoloration was also seen in the diet containing 3% dry-plated lactic acid, but the change occurred over a longer period. This diet began “weeping,” or losing moisture, on day 13 of the study, which then resulted in mold growth on the product. This poses another food safety issue. While the 3% raw lactic acid formula showed a greater reduction in Salmonella cells during the study compared to the 3% encapsulated lactic acid formula, the use of raw lactic acid may cause product discoloration and secondary food safety issues over time.

“We conclude that the encapsulated lactic acids exhibited potential as an antimicrobial in raw meat-based diets for companion animals, because it enhanced the safety of the product, especially the 1% that gave us a three-log reduction… but it still preserved the quality,” Kiprotich concluded.