We use cookies to provide you with a better experience. By continuing to browse the site you are agreeing to our use of cookies in accordance with our Cookie Policy.
Skip To Content
Home » From feed to food: Purina history tells century-long story of pet food

This article was published in the December 2021 issue of Pet Food Processing. Read it and other articles from this issue in our December digital edition.

According to a few sources including the Pet Food Institute and the European Pet Food Industry Federation (FEDIAF), the first commercially prepared pet food was a dog biscuit product introduced in England by businessman James Spratt around 1860. Spratt’s first formula is reported to have included a mix of wheat meals, vegetables, beetroot and beef blood.

As the Industrial Revolution helped the economy grow and a middle class emerged in the late 1800s and early 1900s, domesticated dogs and cats were elevated from working animals to companion status and were gradually welcomed into our homes. 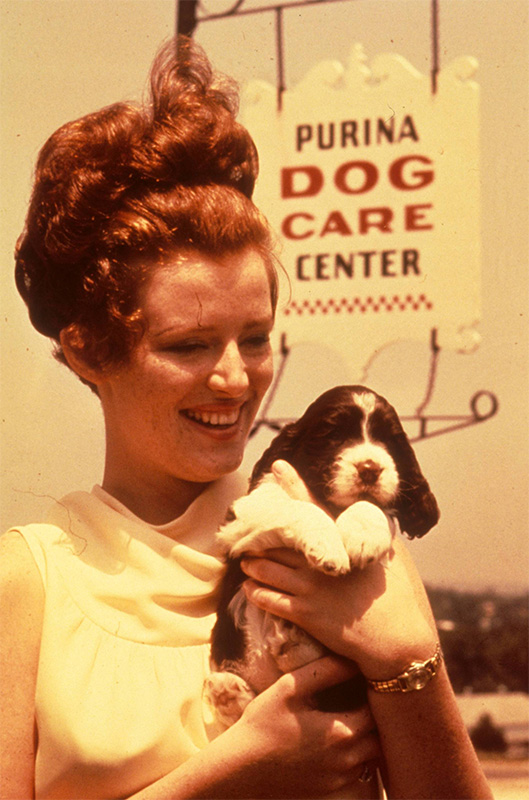 Science and R&D have been at the foundation of Purina’s pet care business from an early stage.

Food for pets began being regulated in the United States separately from animal feed when the Association of American Feed Control Officials (AAFCO), an organization of US state and federal regulatory officials, first included language specifically for pet food in their model bills in 1917.

AAFCO established a definition for “complete and balanced” pet food 52 years later in 1969. This was probably largely due to a better understanding of canine and feline nutritional needs made possible by the research conducted by early 20th century pet food companies such as Purina.

“Since its inception, Purina has been driven to use science to better understand how to improve the health and wellbeing of pets,” said Susan Anderson-Bauer, Purina archivist, St. Louis, Mo. “Over the years, Purina scientists, nutritionists and veterinarians have made groundbreaking discoveries to help dogs and cats live longer, healthier lives.”

Before commercial pet food was available, pets typically ate table scraps or whatever they could forage on their own. Many pets were malnourished, and both disease and short life spans were common. 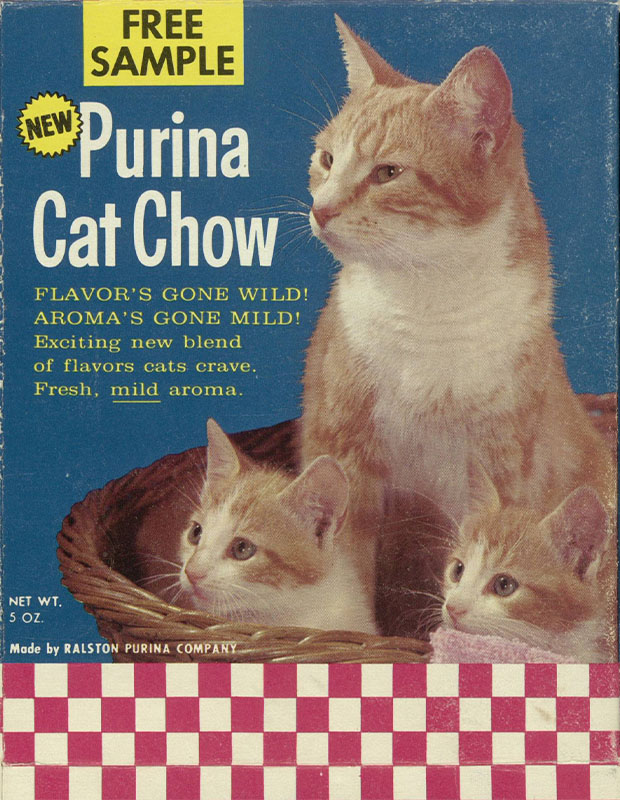 Purina expanded the use of extrusion technology to cat diets in 1962 when the company launched Purina Cat Chow.

Not only has Dog Chow endured for 95 years and been joined by many other successful Purina brands, the company has continued to innovate and evolve the original brand. In the 1950s, Dog Chow was the first commercial pet food produced using extrusion technology to form kibble shapes which replaced the ‘checkers’ squares. This technique was developed at Purina and provides an expanded dry kibble with superior nutrition, digestibility and palatability. Today, extrusion is an industry standard practice.

“Beyond extrusion, Purina continues to develop proprietary machinery and techniques in-house to bring innovation to life,” Anderson-Bauer said. “In the early 1980s, Purina developed a special manufacturing process that precooked the meat prior to sending it through the extruder. This allowed the company to offer pet food with meat as the dominant ingredient.”

In 1965, Purina was the first to create a puppy food specially formulated with the additional protein and nutrients puppies need to develop and grow durng the critical first year of life. And as recently as 2018 and 2019, Purina launched new formulas under this brand — Dog Chow Complete Adult With Real Beef providing additional protein options in the dry dog food line, and the brand entered the fastest growing category in pet food with the addition of Dog Chow Wet High Protein made with real meat and 40 grams of protein per can.

A foundation in research

“When Donald Danforth, the son of Purina’s founder, William H. Danforth, joined the company in 1920, he had a strong appreciation for science and advocated for expansion of our R&D capabilities” Anderson-Bauer said. “It was Donald who championed the idea of the experimental farm and research kennel in Gray Summit.”

It’s notable that while Purina is known for pet nutrition, there are many pet experts on staff dedicated to scientific understanding of pet behavior and pet welfare.

“Purina takes a holistic approach to pet health with nutrition being a key foundational component,” Anderson-Bauer explained. “In total, the company has more than 500 Purina scientists, veterinarians, and pet care experts on staff to ensure our commitment to unsurpassed quality and nutrition.”

The extensive resources Purina has devoted to research have led to several ground-breaking studies and nutritional breakthroughs over the decades that Purina reports have been scientifically proven to improve the quality of life for pets and, in some cases, even extend their lives. These include a 14-year life-span study in dogs, which proved the importance of keeping dogs in lean body condition from puppyhood and throughout their lives. This life-span study led to adjustments in recommended feeding amounts.

“Purina was the first to use that knowledge to recommend feeding less of the food than previously recommended,” Anderson-Bauer said.

Additionally, in 1999, Purina established the Canine Reference Family DNA Distribution Center, which worked globally with institutions that were studying the canine genome. This has led to major, subsequent innovations based on new understandings of genomics.

More recently, Purina conducted research about protecting brain health in aging dogs, as well as a nine-year cat study which demonstrated that feeding a specific blend of nutrients can extend the healthy lives of cats.

Another recent discovery by Purina, following 10 years of research, found that a cat diet formulated with an egg ingredient containing antibodies to Fel d1 can mitigate a major cat allergen causing adverse reactions in humans.

People have increasingly shifted to seeing their pet as an important member of the family. This has led to many pet owners projecting their own food preferences, expectations and philosophies on their pet’s food.

“Purina has consistently been able to provide complete and balanced nutritional options for dogs and cats through the years that meet the nutritional needs of the pet, first and foremost, and meet pet owner expectations,” Anderson-Bauer said.

Purina delivered Fit & Trim, the first over-the-counter weight loss diet for dogs, for the 1976 fitness-focused consumer. As pet owners sought premium or gourmet products in the 1980s, Purina launched Fancy Feast gourmet, Pro Plan with real meat as the number one ingredient, and Purina ONE, the first super premium pet food sold in the grocery channel. With a broad product portfolio sold throughout the globe, Purina continues to meet the needs of today’s pet owners looking for attributes important to them including natural, plain and simple ingredients sourced sustainably.

“For more than 90 years, Purina has been guided by our purpose of enriching the lives of pets and the people who love them,” Anderson-Bauer said.

A company must do many things correctly to remain a leader for nearly a century. For Purina, the longevity and success likely comes as a result of a true passion and love of pets, a foundation in science, dedication to innovation and a commitment to quality and safety.

As Sosland Publishing Company, publisher of Pet Food Processing, gears up to celebrate 100 years of providing food industry professionals timely information, news and commentary, we will be publishing a series of articles across all our titles to celebrate the past, present and future of the people and industry that feeds the world and a few million pets as well.