KANSAS CITY, Mo. – The creators of Grocery Pup, a brand of fresh pet food, took the leap to brick-and-mortar retail recently in a bid to expose more pet parents to fresh, human-grade pet food that is cooked sous vide.

The sous vide method of cooking involves vacuum-packing food items and slowly cooking them in a circulated water bath or steam at low heat. Food manufacturers and foodservice operators favor sous vide cooking which preserves flavor and moisture in food items while killing harmful foodborne pathogens. The emergence of small and affordable sous devices pushed the popularity of sous vide from commercial kitchens to home kitchens and now — with Grocery Pup — into the pet food space.

Ruth Stedman co-founded Grocery Pup with her husband after the couple adopted a dog named Lola in 2016. Consumer demand for fresh foods and meals containing high-quality ingredients has led to culinary innovations in human food, but Stedman found that dog food hadn’t evolved as much as human food.

“I knew I wanted her to have a fresh, whole-food diet, and at the time the only thing that was available out there was raw food,” Stedman said. “But she never really took to raw, and we weren’t very comfortable with raw. So, we started wondering why there was no freshly cooked dog food on the market as well.”

And she’s not alone in her quest for high-quality pet food. According to a survey commissioned by the Michelson Found Animals Foundation, a non-profit animal welfare organization based in Los Angeles, almost one in five people feed their pets exotic protein like bison, and almost four in 10 pet owners with a meal kit subscription service also signed up for a pet food subscription service.

Spending on pet food continues to be the highest source of dollars spent on pets, with spending on dog food leading sales, according to data from the American Pet Products Association (APPA). In 2017, pet owners spent $29.07 billion on food, and APPA forecasts spending on pet food to climb to $29.88 billion in 2018. Key drivers for increased spending in the pet food category include interest in high-end, premium pet food and treats.

That’s where Grocery Pup comes in — expanding the appeal of fresh food but going beyond raw pet food and alternatives to raw food using the sous vide cooking process, Stedman explained. “For us, the most important piece of the cooking process is that it’s a safe way to cook the food by killing the pathogens,” she said. “It’s a way to cook the food that retains the homemade quality. A nice side effect of that is it does increase the palatability. I’ve had some people tell me their dogs turn into maniacs — the exact words used.” 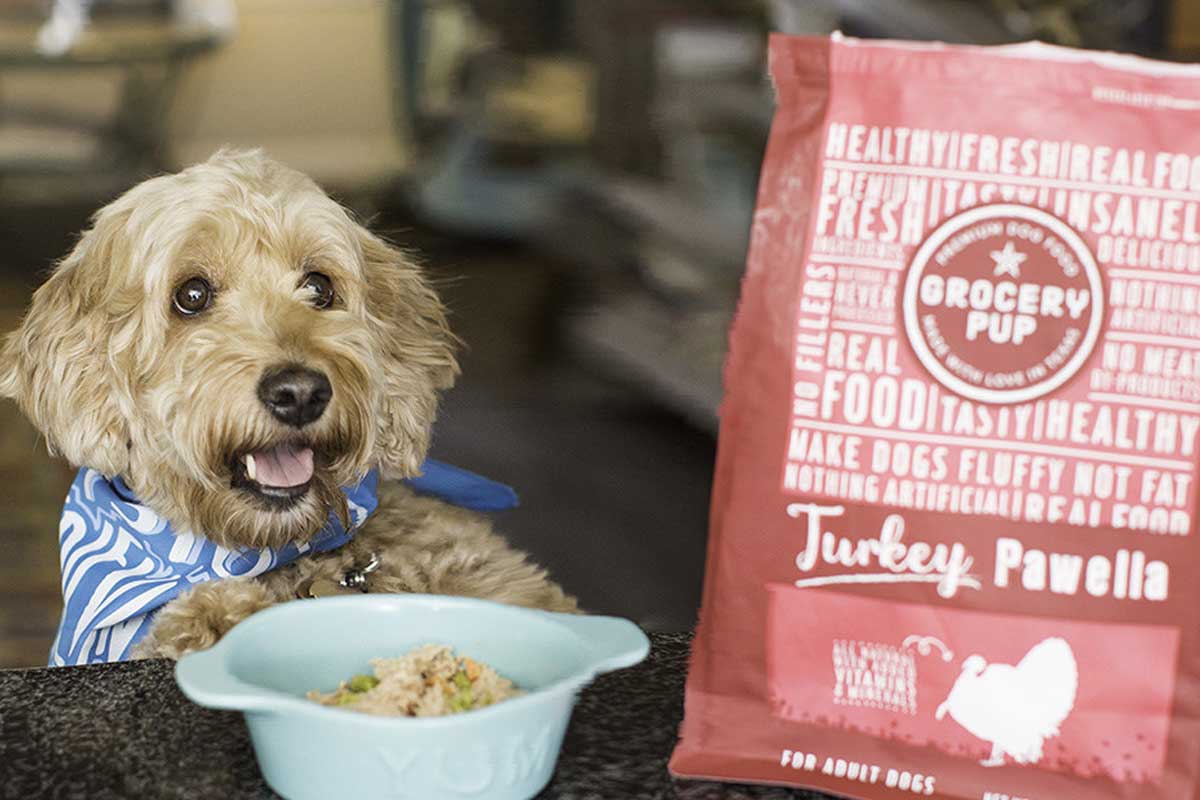 Grocery Pup began as an e-commerce business offering a la carte bags and meal subscription service shipping nationwide. However, the company recently announced Grocery Pup foods will be available at Austin, Texas-based Tomlinson’s Feed stores, a supplier of natural pet food products with 15 locations. The food comes packaged in 5-lb. bags and is available in three flavors: Turkey Pawella, Bitchin Beef and Porky’s Luau. The Stedmans developed recipes for the food in consultation with a veterinarian-nutritionist to ensure the meals are completely balanced.

Meat used in the food must be US Dept. of Agriculture certified, produced in the US and non-GMO, Stedman said. Everything that goes into Grocery Pup food is permitted to go into human food.

“The nice thing about it being made in a USDA facility is that everything that passes through there has to be USDA-certified,” she said. “Some dog foods will say that they use USDA-certified ingredients, but if they’re not making it in a USDA-certified facility there’s really no guarantee that the same quality and safety is being applied to the food.”

Stedman explained that producing Grocery Pup products in a USDA-certified facility was a priority. “We had someone partner with us who’s a huge dog person,” she said, “So, for him, it was something that aligned with what he wanted to do. In the beginning, we were making the food ourselves because we had to build up a certain customer base and volume before we could transition over to a place like that.”

Finding a cooking process that would retain the homemade quality of the food also was important to the Stedmans.

“A lot of times, when you start making food in larger batches it dries out,” she said. “It loses the texture and quality of the food, and you have to compromise on the quality if you scale up. So, sous vide is a good process for us because it retains the moisture of the ingredients, so you get something that’s a lot closer to homemade dog food, and it’s also going to be richer in flavor because of the way it’s cooked.

“The nice thing for dog food is that it also seals in the nutrients and vitamins of the whole foods, so it’s nutritionally on par with raw food, but it’s safer since it kills the pathogens and also more palatable from the cooking process.”

The Stedmans considered high-pressure pasteurization before settling on sous vide. “The thing with [HPP] is we would have to send it to another facility that specializes in that,” she explained. “It was just another step in the process.

“Sous vide still applies the pressure,” she added. “We’re using a steam oven to sous vide [the food], so, it’s essentially like a steamy HPP process, but it also cooks the food at the same time.”

Stedman said the food is manufactured along a very specific set of guidelines. When processing is complete, the items are subject to test and hold before leaving the facility. It’s the care and attention to food safety, according to Stedman, that differentiates Grocery Pup from other small-batch brands of pet foods.

“We’re the only ones that do sous vide that’s in retail,” she said. “The way we package our food is also very unique. We have these patties that stack up in a stand-up pouch bag. So that makes it more freezer-friendly, whereas other brands tend to use deli containers or other small packages which are very difficult to store in the freezer. We’re making it as easy as possible to store this food and be able to defrost it when and where you want.”

Read more about products and brands shaking up the pet food and treat market.