We use cookies to provide you with a better experience. By continuing to browse the site you are agreeing to our use of cookies in accordance with our Cookie Policy.
Home » Slideshow: Behind the scenes at Northwest Naturals

Slideshow: Behind the scenes at Northwest Naturals

This article was published in the March 2022 issue of Pet Food Processing. Read it and other articles from this issue in our March digital edition.

Prior to branching out into pet food, the family business started in 1956 by Mel Morasch, the father of Michael and Steven, had gained a reputation for supplying fresh, quality meats and helping a customer with an innovative NASA product. Morasch Meats is a USDA supplier to grocery stores and restaurants with national reach in specialty products.

When the Morasch brothers’ first pet food co-manufacturing customer asked the USDA who could help put together a human-grade pet food, the USDA suggested Morasch Meats. 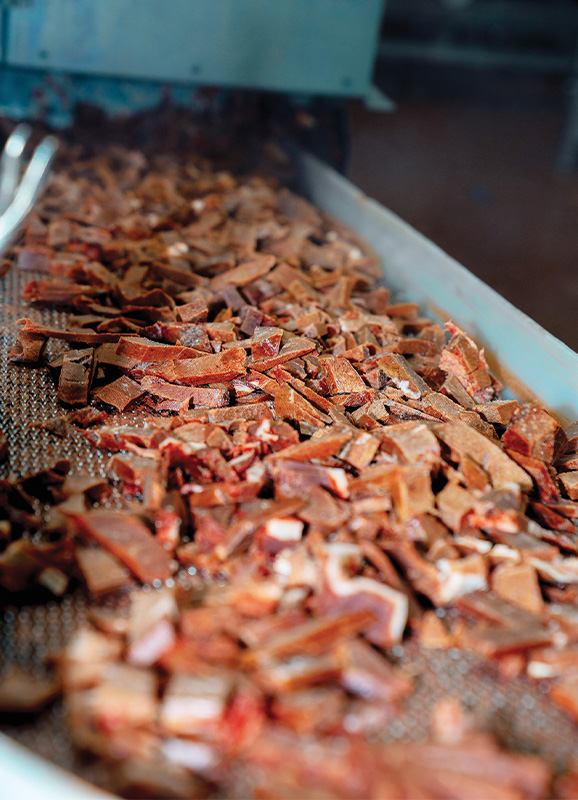 Prior to adding freeze drying capabilities in 2012, Northwest Naturals provided dicing and other meat handling services for years to a freeze-dried pet food manufacturing company. (Photography by Northwest Naturals)

“When Mike asked me if we should try and help this customer develop a human-grade raw pet food, I told him that I believed in diversification,” Morasch said. “I thought it was wise [to diversify] and we were going to do it in a quality way, so I said, ‘Yes, let’s get involved and figure it out.’”

After being one of the first USDA meat manufacturing facilities to produce raw frozen pet food under the same stringent USDA guidelines set for human food, Northwest Naturals has continued to embrace other innovations in the pet food space that include food safety technologies, freeze-drying, sustainability initiatives and solar energy.

In 2009, the Morasch brothers learned about high pressure processing (HPP) and, after some research and a trip by their father to Sweden to learn more about the HPP process, they purchased their first Avure 100-litre HPP machine and set up a subsidiary company called Pressure Safe that is part of the JBT/Avure tolling network in the Pacific Northwest. The company doesn’t currently provide HPP services for other companies because they are too busy with their own products. Pressure Safe currently has two HPP systems, an Avure -QFP 100L and an Avure AV-X.

“We basically got into the first batch of HPP work and realized that we had something that preserved the food values and at the same time gave a very clean product to the consumer that met all of the needs,” Morasch said.

Northwest Naturals uses the acronym HPCP because they use chilled water in their high-pressure, cold processing machines. For both raw frozen and freeze-dried formulations, recipes are first blended, then bulk packaged for HPCP, and afterward formed and individually quick frozen (IQF) to preserve product integrity. Some formulas are then freeze dried.

“HPCP is an important part of Northwest Naturals’ food safety program and ensuring the safety of our products,” Snell said. “[HPCP] is also attractive for consumers because it meets the demand for safe raw pet food products through non-thermal processing. It inactivates harmful microorganisms at low temperatures, while valuable nutritional components such as proteins, fats, vitamins, minerals and enzymes remain unaffected.”

“Northwest Naturals is made in an active USDA human food facility,” Snell explained. “All ingredients are inspected and must pass USDA guidelines by our onsite USDA inspectors. Federal meat inspectors are onsite at both plants every day on every shift to verify our food safety programs. Even though we are making pet food, we are required to use all USDA-inspected and passed ingredients.”

All Northwest Naturals products are made in house from beginning to end in the same facilities that produce products for Morasch Meats. Co-owner Morasch is particularly proud of the quality of ingredients used for the company’s pet food products.

“We can’t bring anything into our facilities that isn’t something you or I couldn’t eat,” Morasch said. “We basically operate the same way for our pet products that we do for our human products. Both operations can use similar equipment as well as the same equipment but at a minimum we must separate them by time and space because USDA has specific restrictions for human food production, and we have to adhere to that and we have for decades. We are very responsible in how we do that. Our procedures for training our employees are the same in the pet food operation as they are for the human food operation. We don’t treat the pet [products] differently than the others. It’s a different label but it’s out of a USDA facility.” 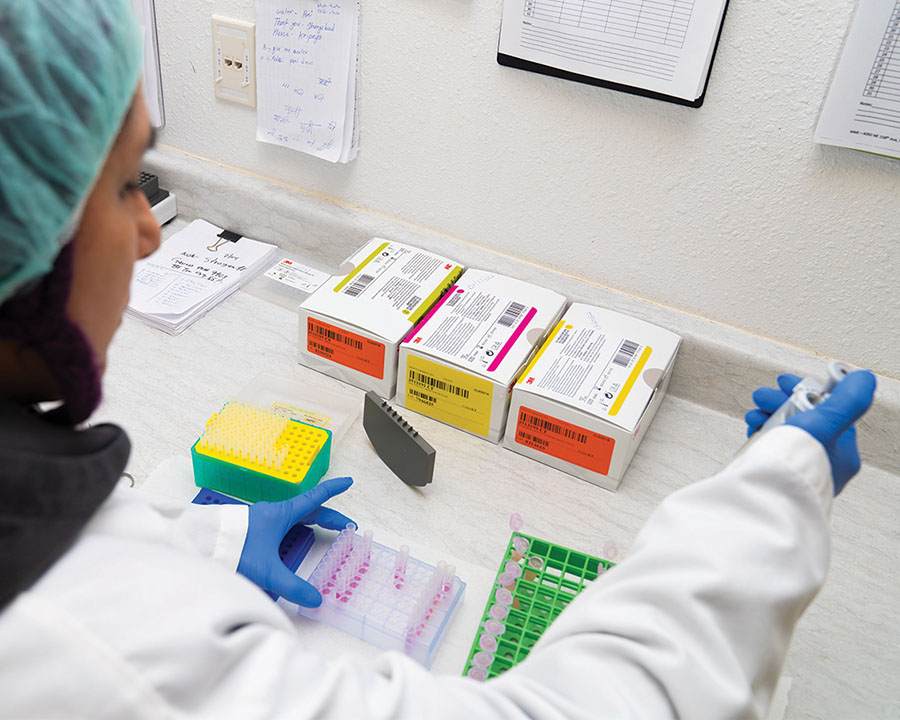 The company conducts third-party quality testing as part of its hold and release food safety program. It also has its own internal lab that matches the labs used by the USDA for the agency’s meat processing labs around the country. Northwest Naturals’ quality control personnel are certified annually to operate the company’s internal lab.

“We do third-party testing of every single batch,” Snell said. “No food can leave Northwest Naturals until it comes back negative for all pathogens.”

Another feature of the company’s food safety program includes the use of photocatalytic oxidation machines throughout its processing areas to reduce the risk of airborne pathogens.

“We get a two-log reduction using this technology that came out of NASA in the early 90s,” Morasch said. “It ionizes the air particles and helps to clean the coils in our refrigeration and kill microbes in our drains. We find it to be a fantastic way to provide an additional level of cleanliness in our processing rooms and coolers.”

Northwest Naturals added freeze drying to its manufacturing capabilities in 2012. Morasch Meats had been a raw ingredient supplier for decades to one of the largest freeze-drying operations in the country. When that freeze dryer stopped producing pet products to focus on human food products, Northwest Naturals stepped in and filled the need in the pet food market. 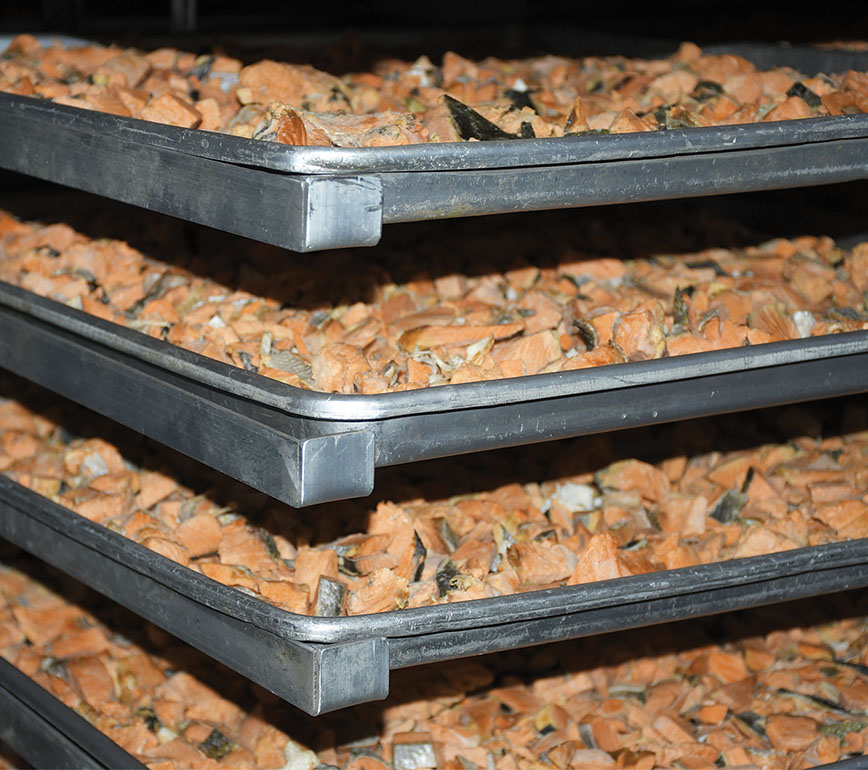 Frozen salmon pieces are on trays ready to go into the freeze-drying chamber. (Photography by Northwest Naturals)

“For products like freeze-dried beef liver, we were the early ones doing a lot of the dicing and other meat handling,” Morasch said. “We have been around in the background of the industry for a long time, and it became obvious that we needed to get in the freeze-drying business. We had a 90,000-square-foot facility, so we started filling it with freeze dryers. Very soon we will have 18 large freeze dryers in that facility. Next steps will be to add another facility and other freeze dryers somewhere else. Freeze drying demand from our private label brands and our Northwest Naturals brand continues to boom.”

Freeze-dried products offer the convenience of being shelf stable, but Morasch said the better product for the pets’ overall health is the raw frozen due to the moisture in the products. However, the distribution and the logistics challenges for frozen products are serious and compounded in today’s markets, making freeze-dried products an important component in the retail marketplace.

“We have continued to invest in our operations to make our people and processes more complete so we can reliably meet the needs of our Northwest Naturals’ customers, as well as our co-manufacturing customers,” Morasch said.

Northwest Naturals products are currently sold across the United States and in Canada, as well as in Hong Kong, Singapore and South Korea. The company’s distribution is focused on the independent pet retail market.

At a time when other manufacturers serving the independent pet retail market are experiencing significant inventory challenges and attributing that to a “perfect storm” of unprecedented demand, raw ingredient delays, labor shortages in the supply chain, and transportation challenges, Northwest Naturals has been maintaining a 95% to 97% fill rate on orders to their customers.

“In this environment with the logistics challenges, we are knocking it out of the park,” Morasch said. “When a Northwest Naturals salesperson talks to a distributor or retail customer, they can be assured that the customer will get the order they requested.”

A challenge for raw frozen product is having enough freezer capacity in the supply chain, but the company reports its distribution partners are aggressively investing in more freezer capacity.

“I have a distributor right now who is adding a 60,000-square-foot freezer because he is growing so much,” Snell said. “That gives you an idea of how fast that category is growing. We have multiple stores that are taking out kibble shelves to add more freezers. We have multiple stores that have what they call a ‘raw room’ which is one big room full of multiple brands of freezers. Freezer space is always an issue, but it is being worked on from all sides, from the distributor to the retailer down to the consumer.” 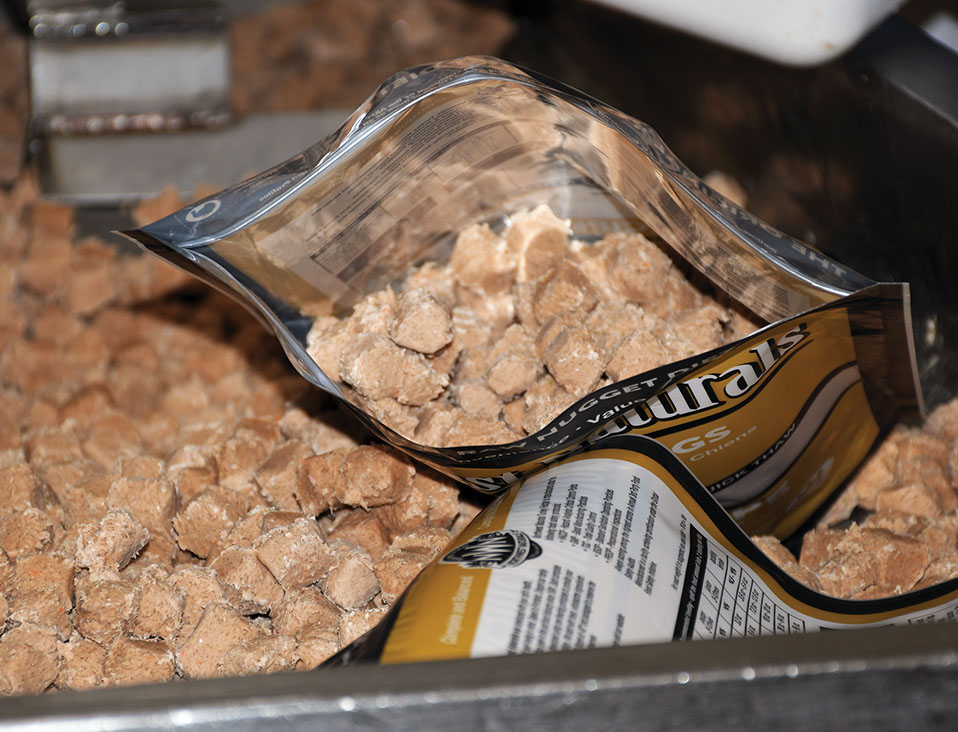 Recent Northwest Naturals product additions have included new 28-oz bags of freeze-dried products and a new beef and trout recipe for both dogs and cats offered in raw frozen and freeze-dried formats. The company has also added a unique two-way display box that can be presented vertically or horizontally with labeling in both directions. Coming out this spring, Northwest Naturals will introduce new functional powders in three different two-ingredient recipes.

Equally as important as meeting its customers’ needs, Northwest Naturals is also committed to being good stewards of the environment. Located in one of the most naturally beautiful parts of the United States, the company is reminded of the importance of using green, environmentally friendly process controls. Its efforts in support of the environment include accreditation for sustainable business operations by the Pet Sustainability Coalition, being a Green Fleet Pioneer in Oregon’s Clean Fuels Program, a comprehensive recycling program, and an energy efficiency program that includes a heavy investment in solar.

“We were paying more than $110,000 per month for electricity at our two facilities,” Morasch said. “When making the decision to expand our capacity, our electric bills were going to increase significantly. We made the decision to invest heavily in solar, which was just completed in January. We have been told it’s the largest privately owned rooftop solar installation in the Portland metro area.”

The rooftop solar installation added 1.2 megawatts of electricity to the facility’s existing 9,000 amps of 480-volt power.

Northwest Naturals is family owned and does not share financial data publicly, but the company did share that it has experienced tremendous growth over the past several years and sales activity for the beginning of 2022 was up 200% over the same period in 2021.

“In this environment with the logistics challenges, we are knocking it out of the park,” said Steven Morasch, Northwest Naturals.

“The raw category is becoming more and more popular as consumers become aware of the benefits of raw feeding,” Snell said. “Once that has been established, Northwest Naturals becomes a No. 1 pick due to the USDA inspected and passed ingredients, the value   — because we make everything in house — and the multiple varieties of sizes and proteins available in our recipes.”

“People and their companion animal pets always need to eat,” he said. “So, we will always be busy as long as we continue to make quality products the right way. We are on a very strong growth path. In our business, we are doing things with technology, doing it wisely, I believe, and we’re willing to step up and make investments that push us forward to the benefit of our customers, our employees and obviously the pets. We are proud of what we do.”