This article was published in the December 2021 issue of Pet Food Processing. Read it and other articles from this issue in our December digital edition.

The pandemic fueled consumer interest in the food supply chain. It’s no longer sufficient to be simply transparent with how food is sourced and produced. Now consumers want to know how food production impacts the earth. This includes pet foods and treats.

This is good news for the rendered ingredients marketplace, which has long been criticized for putting byproducts into pet food. Communication is key to explaining why certain ingredients — namely rendered proteins made from animal muscles, organs and bones not used in human food but long consumed by animals in the wild — make sense when prioritizing sustainability of our natural resources.

“Consumers are widely unaware of how agriculture and livestock produce more than just food, and rendering prevents waste in animal production systems by utilizing nearly all byproducts from the production of meat,” said Anna Wilkinson, director of communications, North American Renderers Association (NARA), Alexandria, Va. “Rendering is highly sustainable and is essential in producing sustainable animal feed ingredients and pet food as well as many nonfood products consumers use every day.” 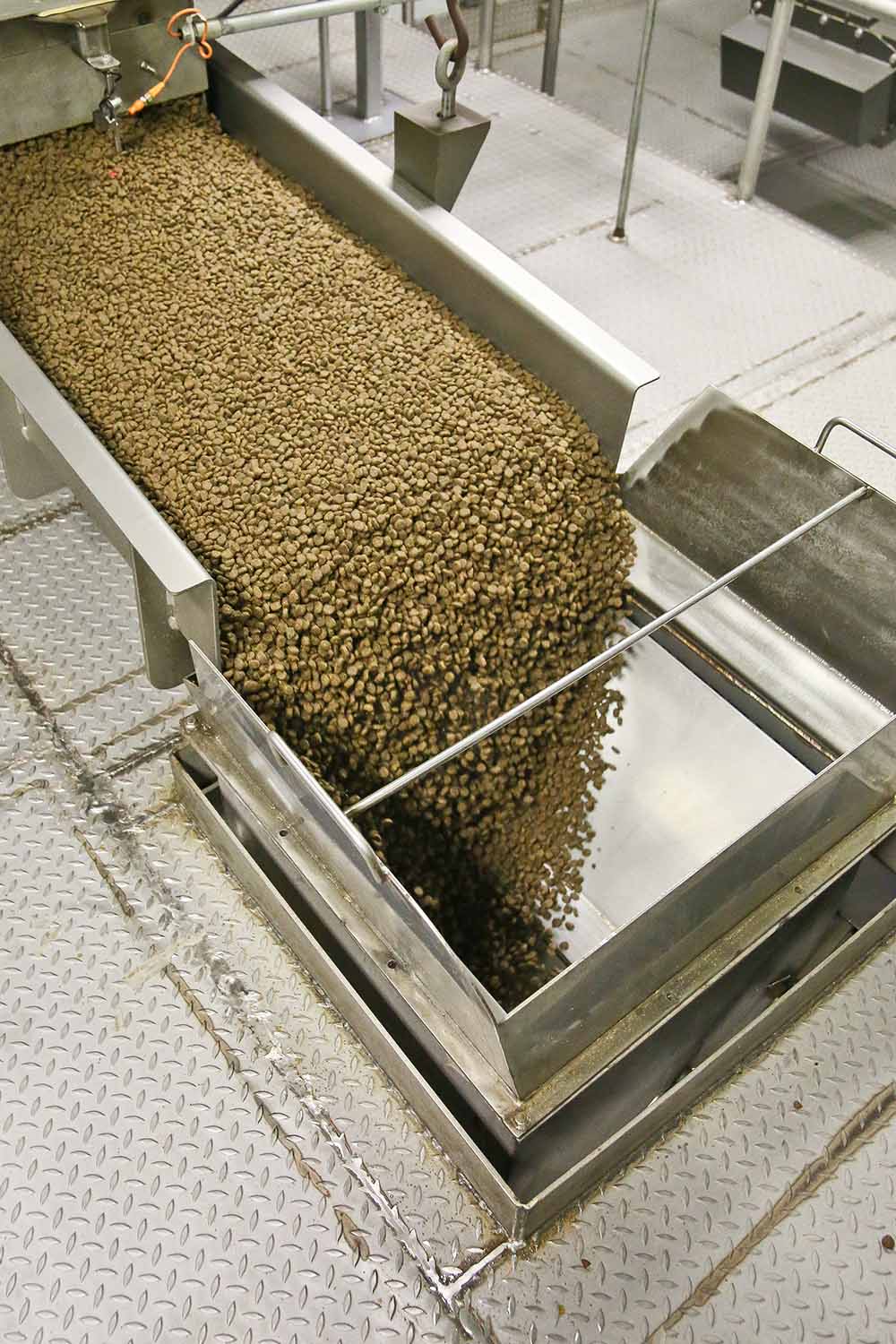 Animal protein meals are a key ingredient in a large percentage of dry pet food formulations on the market. (Source: Sosland Publishing Co.)

Ben Hubbard, chief operating officer and general counsel, Integrated Proteins, Kansas City, Mo., said, “Some pet food companies attempted to create a negative connotation with byproducts by using trendy buzz terms such as ‘free from byproducts’ in their marketing. In human nutrition, ‘byproducts’ can make consumers wary because they have a negative association with the word.”

That’s changing with the upcycling movement. Many food byproducts are safe and highly nutritious. They also reduce waste and hunger.

“Rendered products are an important part of the food supply chain because they provide a sustainable outlet to utilize a raw material stream that would otherwise be landfilled or destroyed,” Hubbard said. “Instead of heading to a landfill, rendered products go to pet food manufacturers, where they make up 40% to 60% of most finished kibble formulations for cats and dogs.

“Without rendered products, the cost to manufacture these kibbles would increase drastically, and the supply of proteins for pet food ingredients would be in competition with proteins in the human consumption space,” he added. “In addition to reducing costs for the pet food consumer, rendering utilizes 100% of each animal harvested for human consumption and, in turn, provides pet food manufacturers with a safe and nutritional ingredient for pet foods.”

Lu Ann Williams, global insights director, Innova Market Insights, the Netherlands, said, “One of the biggest shifts we are seeing is that the health of the planet is now the top concern of consumers. Sustainability is no longer just a Wall Street issue. It might not be the top purchase driver for all consumers, but for many it clinches the deal when it comes to choosing between products.”

While the trend toward premium pet food includes using human-grade, whole food ingredients, this is not viable for the future, with the global human population projected to grow by more than two billion people by 2050. That’s about 75 million people a year, and many more pet companions. 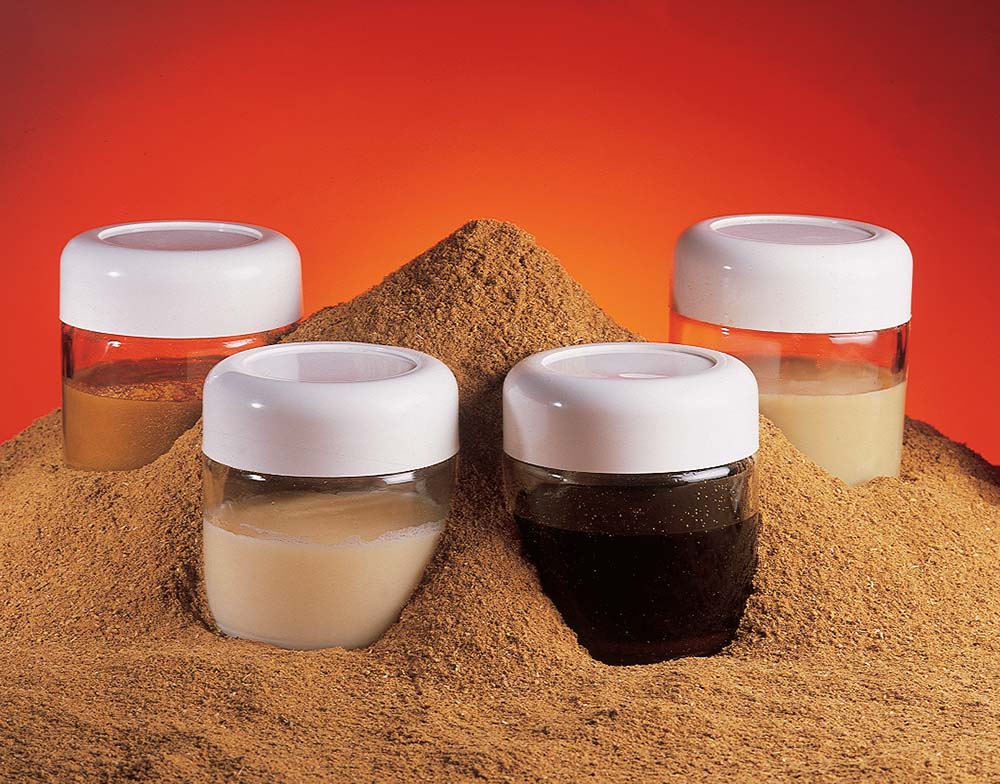 Rendered ingredients are made from the leftovers of animal butchering. Some are made from offal, the internal organs and entrails of butchered animals, the parts most humans aren’t culturally inclined to consume themselves. Others are made from trim and less popular cuts, such as necks and backs. The US Department of Agriculture does not deem some animal parts, such as udders and lungs, edible for human consumption; however, these parts are safe and nutritious for animals.

Rendering involves heat, pressure and drying. The objective is to remove most of the water and fat, producing an ingredient that is primarily protein and minerals. Rendered products are ground to form uniformly sized particles, and hence referred to as protein meals on ingredient statements.

“The drying process allows for a consistency in the powder,” Johnson said. “The powders are best suited for dry pet foods and treats, because the final product needs have low water activity.”

Raw product must be heated as quickly as possible to destroy inherent enzymes and bacteria that could degrade the fat and protein. In order to cook uniformly, raw product is chopped into small pieces. This also increases production rates and decreases energy costs.

Modern cookers are controlled to reach the critical temperatures without overcooking, which can destroy nutrients and digestibility.

“Rendered ingredients provide a relatively inexpensive, stable and concentrated protein source,” Hubbard said. “In the current market, it would likely be impossible to find a sustainable and cost-effective alternative to animal-based rendered proteins for the production of finished kibble. While it is possible to use other sources of protein, such as high-protein vegetables or legumes, in pet food formulations in the place of rendered meals, doing so is not currently economically viable at scale. Another drawback to alternatives to meat-based proteins is that they do not have the same nutritional benefits as meat-based proteins and are less digestible.” 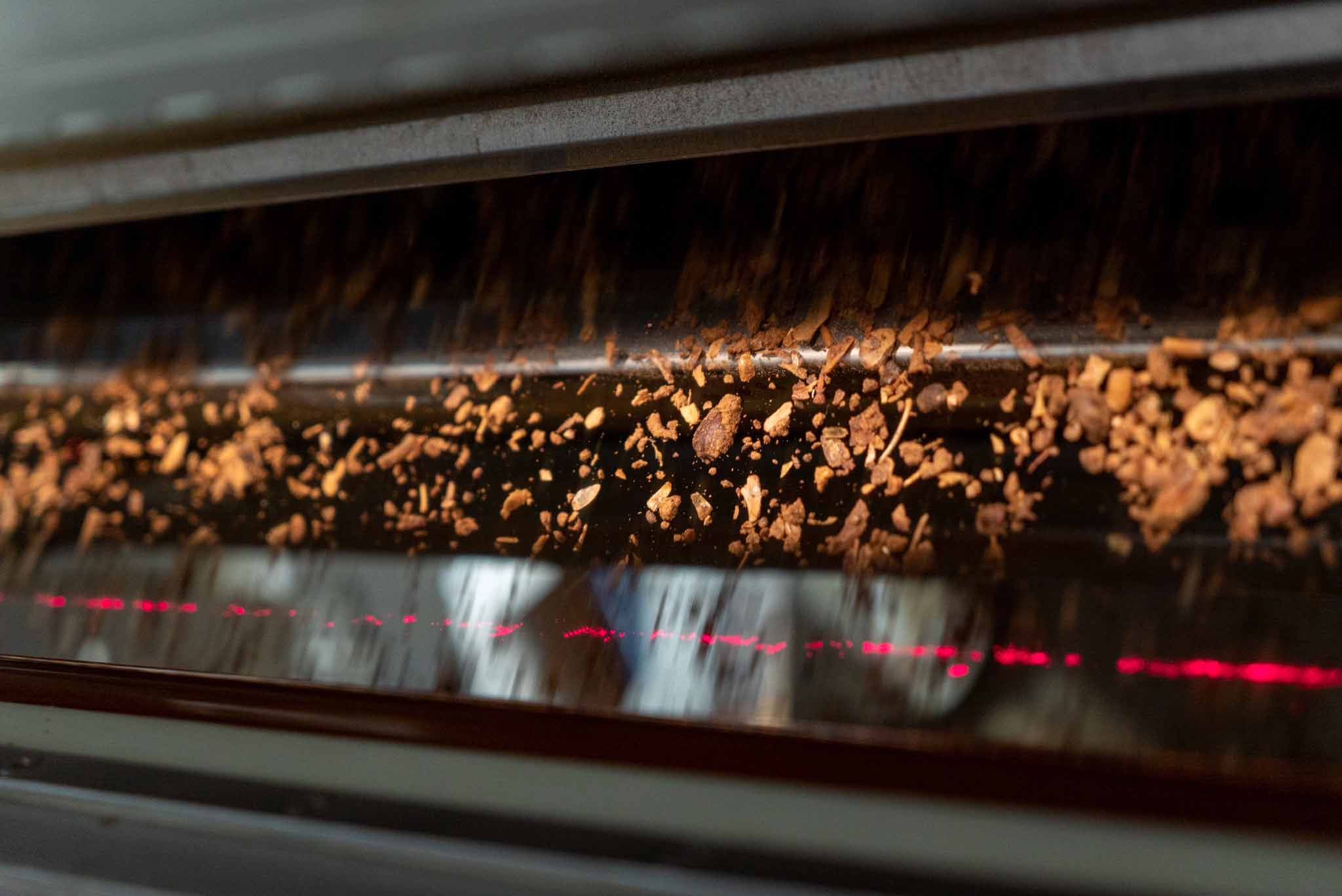 “Anyone avoiding rendered products for reasons of quality, nutrition or reputation should take another look,” Meeker said. “Rendered ingredients are not only sustainable, but also safe due to the enforcement of strict safety guidelines.”

Such NIR analysis is an accurate and rapid method for quantitative determination of the major constituents in most types of food and agricultural products, including pet foods. It’s commonly used to help screen materials for quality assurance purposes. The NIR equipment can also give an approximate reading for protein, moisture and fat content.

Integrated Proteins specializes in poultry meals, but also supplies fish meals, specialty animal-based protein meals and other specialty ingredients. The company uses a proprietary process to refine already-rendered meals in order to improve their quality and safety prior to inclusion a finished pet food.

“Despite renderers’ reasonable best efforts, rendered materials contain foreign matter inherent in the rendering process,” Hubbard said. “We use selectively applied separation techniques to remove foreign matter and other non-digestible particles. This process makes meals safer for pets and more digestible by removing what should not be in the meal without compromising the protein levels or overall nutritional profile of the meal.” 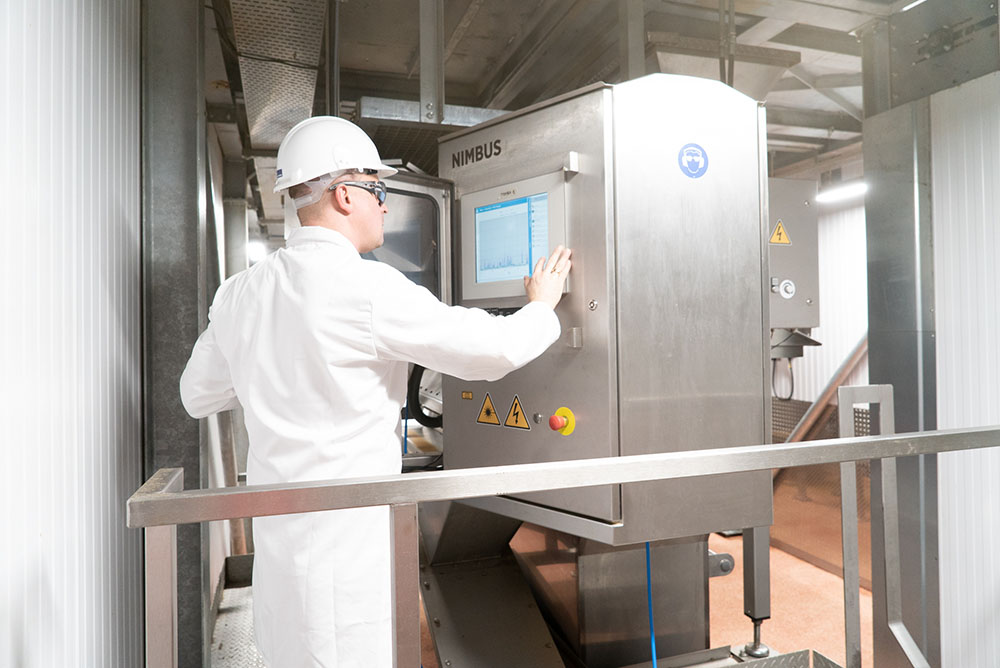 Technology is continually advancing to improve the quality and safety of rendered protein meals. (Source: TOMRA)

Tomra Food, Madrid, Spain, markets optical sorting technologies to renderers to maximize efficiency and minimize waste. Rendered ingredients for pet food is a higher-value use of meat and bone materials than rendering for alternatives, such as fuels or fertilizer.

“But achieving higher commercial values requires higher standards, necessitating the detection and removal of the smallest fragments of foreign material from the product mix,” said Lars Povlsen, global sales manager of proteins, Tomra Food. “In addition to the economic benefits, improving rendering efficiency is also good for the environment. As the world moves toward a circular economy, with the urgent need to reduce greenhouse gas emissions and landfill waste, it is worth remembering that rendering is essentially recycling. This is important because approximately 50% of the animal is considered inedible by human consumers and, without rendering for other uses, would otherwise be wasted.”

Such optical sorting technologies assist with identifying the foreign materials often accidentally introduced into the product at slaughterhouses. This includes everything from hairnets to broken glass.

“One risk is the mechanical process of removing feathers from poultry, because this is done by rubber fingers that can break off and end up in the product stream,” Povlsen explained. “Another risk is the way in which poultry is held above the conveyor belt by plastic hangers. These hangers can also break and fall into the product mix.

“Although some of these foreign materials are initially large enough to be seen, grinding processes reduce them in size to almost invisibly small fragments that the human eye cannot detect,” he continued. “In addition to sorting machines detecting and ejecting the tiniest fragments of foreign material, they can also help renderers pre-determine the desired levels of bone meal and protein content, so that premium ingredients can be rendered to fetch a premium price.” 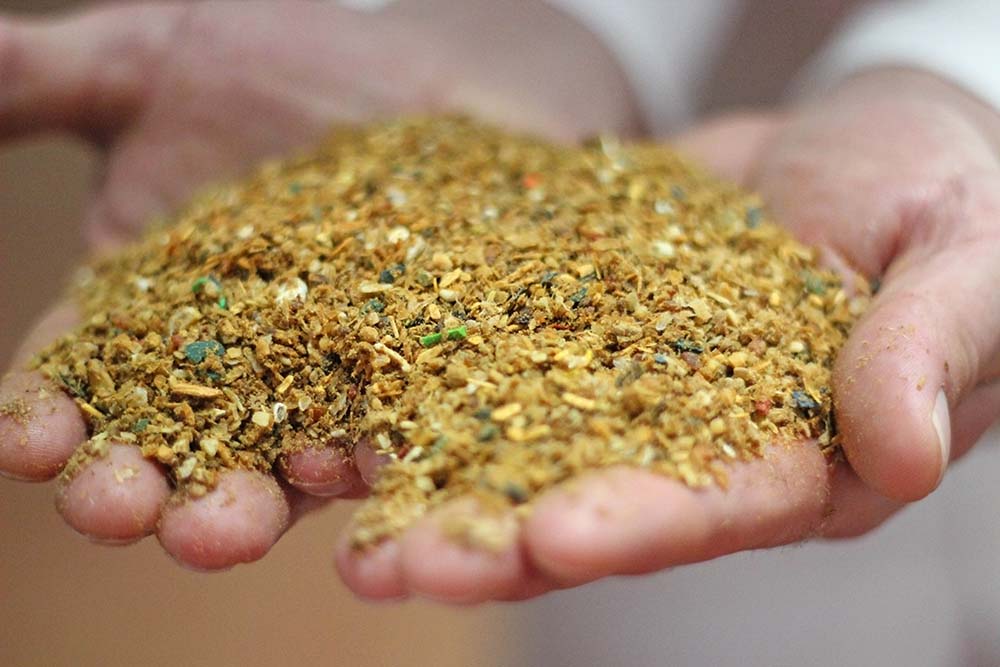 Inspection systems remove even the smallest fragments of foreign materials from rendered ingredients. (Source: TOMRA) Because rendered ingredients are made up of actual meat and offal, they contain the flavor profiles that pets are biologically driven to crave.

“When the source of the rendered meal is from animal muscle or offal, it is highly digestible,” Hubbard said. “As a result, the proteins in the rendered meal are actually being absorbed in the small intestine of the pet and converted for use by the pet, rather than just passing through as waste.

“Having the right levels of protein in a bio-available form is fundamental to a pet’s ability to carry out processes such as tissue growth and repair, immune health, oxygen transportation, hormone production and others,” he concluded.