We use cookies to provide you with a better experience. By continuing to browse the site you are agreeing to our use of cookies in accordance with our Cookie Policy.
Skip To Content
Home » Evermore Pet Food reaffirms its commitment to animal welfare

OLIVEBRIDGE, NY and OAKLAND, CALIF. — Women-owned dog food company Evermore Pet Food announced it has attained Global Animal Partnership (GAP) certification for all its poultry-based formulas. According to the company, the certification reaffirms its longstanding dedication to animal welfare.

“We are impressed by Evermore’s motivation to work with higher welfare farms simply because it is the right and responsible thing to do,” said Nancy Roulston, senior director of corporate policy and animal scientist at ASPCA Farm Animal Welfare. “By achieving GAP certification, Evermore offers pet owners a verifiably more humane option in the marketplace. We are excited to add their chicken pet food products to the ASPCA’s Shop With Your Heart list of distinguished brands dedicated to improving the lives of farmed animals.”

Since its founding in 2009, animal welfare, product quality, transparency and accountability have been top-of-mind for Evermore. To demonstrate their commitment to animals, the company adopted the Better Chicken Commitment, a policy endorsed by 10 animal welfare organizations throughout the United States and Canada, earlier this year, which builds upon the GAP certification. 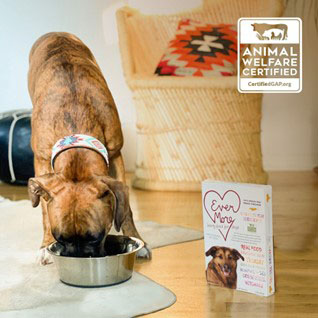 “We do this work because we have deep love and respect for animals, including those farmed for food,” said Alison Blumberg, co-founder of Evermore. “We have exclusively sourced GAP-certified poultry since 2015 and have been so singularly focused on making the best and highest welfare food possible that we haven’t taken the steps to be certified ourselves. Now it’s time for us to officially join GAP and work together to raise awareness and effect change.”

“We are so pleased that Evermore is taking this step to demonstrate their commitment to animal welfare,” said Diane McDade, business development manager for GAP. “We are excited to partner with them to support farms that are committed to animal welfare and give more choices to consumers who care about their pets and animals in general.”