We use cookies to provide you with a better experience. By continuing to browse the site you are agreeing to our use of cookies in accordance with our Cookie Policy.
Skip To Content
Home » Wisconsin meat shop finds success in pet food

After decades in the meat processing field, Glenn’s Market & Catering in Watertown, Wisconsin, took its business to new levels after it expanded its offerings to pet food customers beyond smoked bones and pig ears. Today, its growth in that area accounts for about 15% of the company’s entire volume. That’s saying something for one of the largest family-owned meat stores in the state.

Owner Glenn Roberts and his son Jeff acknowledge that it took a major investment to add pet food and treats to its portfolio, but their store, operated under US Department of Agriculture (USDA) inspection, now boasts 35 ft. of pet food display cases, featuring everything from pet treats to raw diet dog food and an amazing array of freeze-dried pet foods.

“We are also private labeling our pet foods for over 30 other companies and now ship our product across the country,” Glenn explains. “We feature 28 different types of dog treats and produce beef, pork, chicken and turkey raw pet foods in both refrigerated packs and freeze-dried versions.” 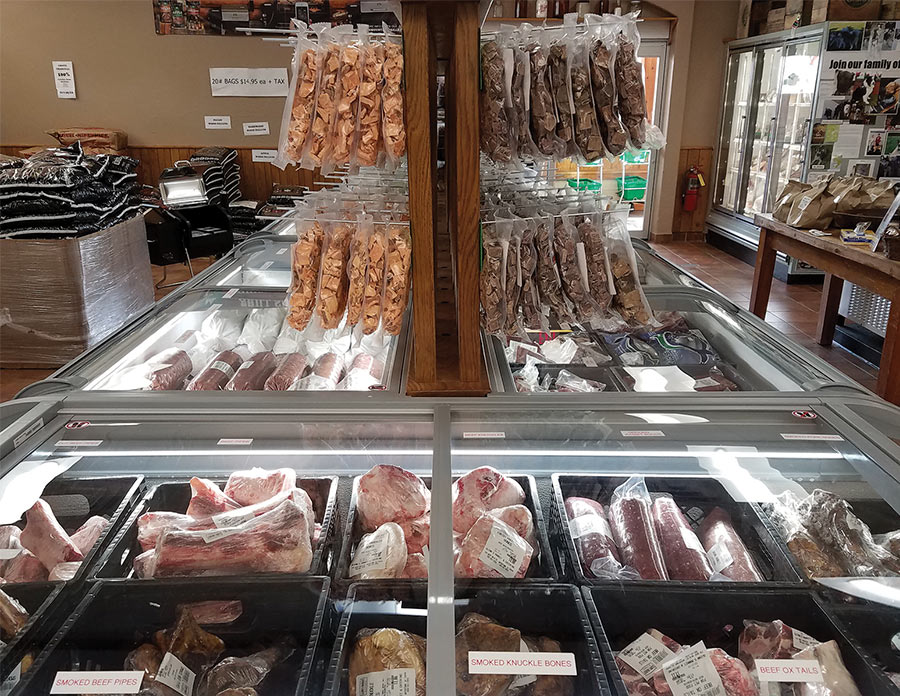 Glenn’s Market & Catering buys mostly boxed beef, pork and poultry from outside suppliers for its retail and commercial meat customers. The company purchases liver, hearts, gizzards and kidneys by the pallet load each week, along with about 500 lbs. of bones in frozen blocks.

Most of the dog food formulas Glenn’s sells are merchandised in refrigerated 5-lb. chub rolls or in 3-lb. tubs. Many of the other offerings are designed for cats and come in smaller packages.

“It’s odd that many customers think cats really want seafood items... and we make a large variety of those... but cats are naturally meat-eaters and we’ve expanded our line-up to accommodate our customers’ wishes,” Jeff says.

The company’s pet food products are marketed under the Grandpa Glenn’s label and feature natural proteins, made with no fillers, preservatives, dyes or glutens, and offer natural-flavor profiles with vitamins, minerals and enzymes.

Glenn says pets consuming his products enjoy health benefits, including shinier fur, better breath, improved digestion, better temperament and higher energy levels. “We can add things like vegetables to our pet foods for customers who want them, or they can buy them as presented and mix their own organic rice or other personal favorite ingredients into the blend.”

Tools of the trade

Some of the company’s processing equipment includes a 700-lb.- and a 980-lb.-capacity freeze dryer. “Our equipment investment started out with the common items like grinders and stuffers that you would find in most meat plants,” Glenn says.

“But when we went out to get freeze drying equipment, that was a major amount to venture. Sometimes we think the pet food aspect of our company keeps the consumer meat business running.”

The company’s online storefront, glennsmarket.com, is a major driver of its pet food sales. Smaller orders are shipped by UPS, but larger orders are trucked to major accounts and private-label companies from California and Florida to New York. Glenn says they’ve considered adding a separate processing facility dedicated to pet food production.

Pet food is a growing and profitable segment of Glenn’s Market & Catering that Glenn would recommend to other  business owners. “Many small meat processors gave up slaughtering livestock because of governmental regulations, rising insurance costs, and disposal fees for rendering companies to pick up their waste,” Glenn reflects. “For those who continue to deal with those costs, I can only suggest that they might want to think about what they can make in the value-added pet food area from items they are paying to have hauled away.”