We use cookies to provide you with a better experience. By continuing to browse the site you are agreeing to our use of cookies in accordance with our Cookie Policy.
Home » Freshpet delivers strongest quarterly growth since 2014

SECAUCUS, NJ. — Following a year of volatility in 2021, Freshpet delivered its strongest net sales growth rate in the first quarter of 2022. The company shared big plans for capacity expansions expected to support its growth strategy through 2025.

“For perspective, our first quarter net sales are more than our net sales for the entire calendar year of 2016, which means we have doubled the business twice since 2016,” said Heather Pomerantz, chief financial officer at Freshpet. “In fact, we have doubled this business about every 3 years since it was founded, and that trend is accelerating with Q1 of 2022 being 2.4 times the size of the same quarter only 3 years ago.”

The increase in net loss was attributed to increased selling, general and administrative (SG&A) expenses, which were partially offset by growth in net sales and gross profit. SG&A expenses were up 31.7% to $60.6 million in the first quarter, but decreased year-over-year as a percentage of net sales to 45.9%.

E-commerce sales totaled $11.2 million in the first quarter of 2022, up 79% year-over-year and accounting for roughly 15% of the company’s total sales. The company continues to invest in its in-store presence, adding 300 stores to its network in the first quarter and upgrading or adding additional refrigerators to 179 stores.

"Our Q1 results demonstrate that we are a much more resilient company today than we were one year ago,” said Billy Cyr, chief executive officer of Freshpet. “The investments we made in our workforce and buffer capacity enabled us to overcome the challenges presented by Omicron, industry-wide supply chain disruptions, and our ERP conversion – and still deliver Freshpet's strongest quarterly net sales growth rate since the company went public in 2014.

"We are now extending that same conservative planning and aggressive action approach to our long-term capacity expansion plan,” he continued. “Our updated capacity plan delivers incremental capacity, expanded capacity and greater efficiency than the previous plan. This will ensure that Freshpet continues to fulfill its mission of changing the way people nourish their pets forever."

Alongside its earnings, the company announced plans for a new Innovation Kitchen near its existing manufacturing campus in Lehigh Valley, Pa. The new state-of-the-art facility will span 99,000 square feet and is slated for completion in the second half of 2023.

“The Lehigh Valley has been a wonderful community and partner to Freshpet since Freshpet began operations in Quakertown in 2006,” Cyr said. “We moved to our current Kitchens facility here in 2013, expanded it twice and we are excited to continue that legacy by constructing our new Innovation Kitchen in the Valley.

“Freshpet’s commitment to constant innovation and providing our pets the highest quality of fresh, nutritious, real food is unwavering,” he added. “This new Innovation Kitchen is yet another step in our evolution and will focus solely on our new manufacturing technologies and product innovations to help propel our business forward and build upon the industry leadership position that we hold today.”

The Innovation Kitchen will allow the company to expand its manufacturing capabilities and fuel new product development.

“We've been experimenting with a variety of new production technologies over the past year, some that support existing products and some that enable new innovations,” Cyr said in the company’s first quarter earnings call on May 2. “We are ready to scale up some of those technologies.”

Freshpet is partnering with J.G. Petrucci Company, a design/build firm based in Pennsylvania and New Jersey. J.G. Petrucci’s subsidiary, Iron Hill Construction Management, will lead construction of the exterior and interior of the new Innovation Kitchen.

“This is an exciting project for our company as we accommodate an existing tenant’s growth in the Lehigh Valley and build a space that will lead to such new, innovative products for Freshpet,” said Joe Petrucci, project executive at J.G. Petrucci Company. “Iron Hill is moving full steam ahead and coordinating closely with Freshpet team. We can’t wait to get this project started.”

The company continues to work toward mitigating supply chain and labor challenges faced in 2021 and is gradually working its way out of a trade inventory hole affecting in-stocks over the last 18 months.

“We still have some pockets where our in-stocks are not where they need to be, particularly in pet specialty, where we went through a distributor change,” Cyr noted. “But overall, we have our best retail conditions in almost two years, and they keep getting better.”

Lead times for equipment and construction have doubled or tripled in some cases, Cyr said, which has affected the company’s capital expenditure planning, According to Cyr, the cost of construction materials and equipment have increased 20%, notably for high quantities of stainless steel.

The company has several capacity expansions in the works, including adding new packaging lines to its Kitchens South facility and starting up its new facility in Ennis, Texas, which will be supported by a second and third phase of expansion. The company’s previous Phase Two plan for the Ennis facility has now been split up into Phase Two and Phase Three to accommodate the company’s evolving long-term capital growth plan. 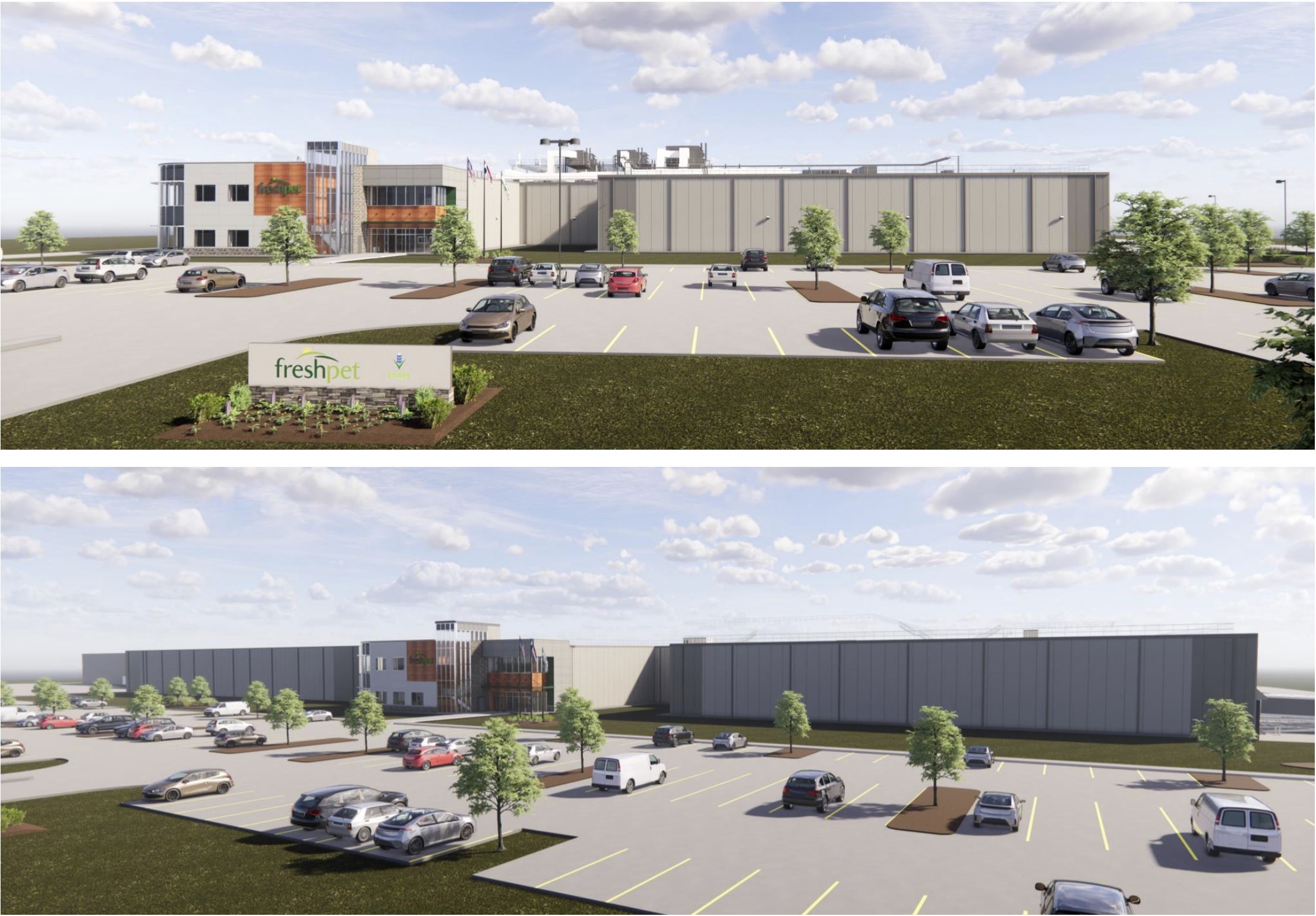 “The new Ennis Phase Two will be dedicated to rolls lines, and we will be pulling forward the beginning of construction as well,” Cyr noted. “In fact, we've already begun the site preparation work for that expansion and expect a new Phase Two to open in Q4 of 2023. Phase Three will largely focus on bag lines and will be slated to open a year later in Q4 of 2024.”

Through these expansions, the company hopes to triple its capacity and achieve a net sales capacity of $2.9 billion by the end of 2025. The company will build on its operational know-how and is exploring new technologies to remain competitive, fine-tune efficiency and grow its capacity.

Freshpet spent a total of $55.9 million for capital projects over the first quarter and plans to spend roughly $400 million in capital throughout 2022.

“Looking ahead, we are also keenly aware that the operating environment remains extremely challenging,” Cyr said. “The planning and skills that it took to overcome the obstacles we faced in Q1 will be needed over and over again in the coming months and years if we are to sustain high rates of growth.”

To assuage inflated costs for raw materials and operations, the company implemented two price increases for its products, first in the fourth quarter of 2021 and again in the first quarter of 2022, totaling an approximate 17% increase in pricing overall, Pomerantz said. So far, she said the company has seen “very little, if any” price sensitivity following the first price hike at the end of last year.

“Pricing will play a bigger role in Q2 than it did in Q1 as our second price increase did not go into effect until the middle of March,” she said.

Due to increased energy costs in its operations, the company may implement a third round of price increases to cover inflated costs.

“That could create another timing mismatch between increased costs and increased pricing, but it would be much smaller than the mismatch that occurred in Q1 when a broader set of commodities were impacted,” Pomerantz explained.

As part of its goal to be in 11 million US households by 2025, Freshpet expects total household penetration growth to continue in 2022 to more than 4.2 million households by the end of this year. Buying rate is also expected to increase by 26% for the company’s total portfolio and by 22% for its core dog food business over the course of the year.

Weekly sales of Freshpet in Canada and the United Kingdom are continuing on an upward trend since early 2020, driven largely by targeted advertising investments.

Freshpet’s trajectory has the company exceeding its 2025 goals, but the company will maintain its long-term guidance to account for unpredictability. The company expects to grow net sales by 35% or more in the full year 2022, aiming for roughly $575 million in revenue and an adjusted EBITDA of $55 million, up 28% year-over-year.