We use cookies to provide you with a better experience. By continuing to browse the site you are agreeing to our use of cookies in accordance with our Cookie Policy.
Skip To Content
Home » Merrick partners with DoorDash to deliver BBQ for pets, pet owners

AMARILLO, TEXAS — In an effort to support animal shelters and communities impacted by COVID-19, Merrick Pet Care, Inc. launched a campaign encouraging pet owners to support local BBQ restaurants, in tandem with the release of its regionally inspired, slow-cooked BBQ recipes for dogs.

The pet food company has committed to donating more than $50,000 to shelters across the United States as part of the campaign.

“While interest in pet adoption has never been higher, local shelters need our support more than ever. At the same time, local restaurants have faced significant challenges this year,” said Barbara Liss, vice president of marketing at Merrick Pet Care. “At Merrick, we know how to deliver tasty and nutritious meals to pet food bowls. By working together with DoorDash and local BBQ restaurants, we are able to deliver on our commitment to giving back to the community by supporting local restaurants and helping shelter pets at the same time.”

“Due to the current pandemic, we’ve had to cancel several major fundraising events that we depend on each year to support our no-kill mission and rescue dogs, cats, puppies and kittens,” said Joanne Yohannan, senior vice president of operations at North Shore Animal League America. “This BBQ 4 Good program with Merrick and DoorDash is incredibly timely for us – these donations will go a long way to fund our efforts to help pets across the country find loving, responsible homes.”

The participating restaurant-animal shelter duos include la Barbecue and Austin Pets Alive! in Austin, Blue Pit BBQ and The Baltimore Animal Rescue and Care Shelter (BARCS) in Baltimore, and Smoke Daddy and PAWS Chicago in Chicago.

Pet owners who order BBQ through this campaign will also receive a complimentary can of Merrick’s new slow-cooked BBQ dog food.

The company first introduced its slow-cooked BBQ dog diets at Global Pet Expo 2020. The canned dog foods feature beef, pork or chicken as the first ingredients in each recipe, as well as whole sweet potatoes and carrots and broth. 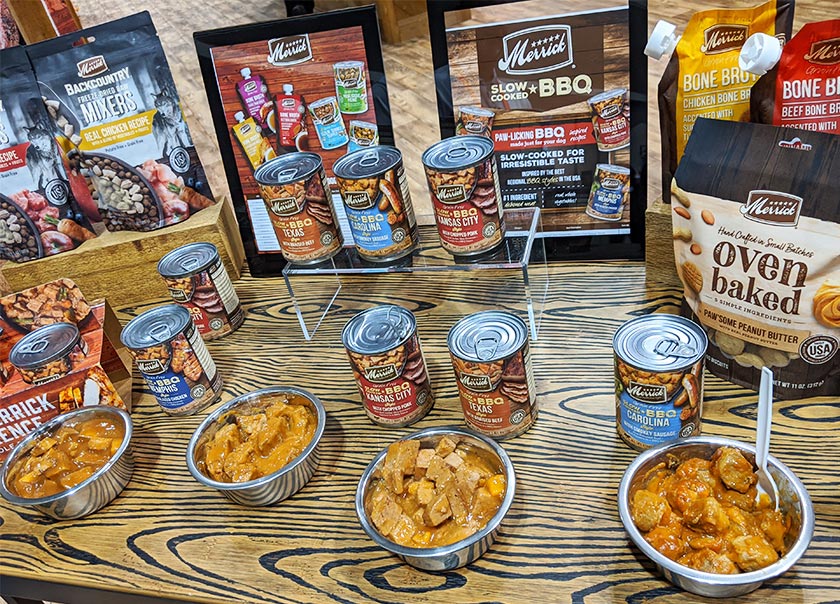 Each formula is inspired by a regional BBQ found in the United States, including Texas Style with Braised Beef, Kansas City Style with Chopped Pork, Carolina Style with Smokey Sausage, and Memphis Style with Glazed Chicken.

“We named our restaurant after our sweet pit-bull Sakai – who we adopted from The Baltimore Animal Rescue and Care Shelter – because dogs and BBQ have always been an important part of our life,” said Cara Bruce, co-owner of Blue Pit BBQ and Whiskey Bar. “When I first opened a can of Merrick’s new slow-cooked BBQ, Memphis-style glazed chicken recipe for dogs, it smelled just like the BBQ chicken on our menu at Blue Pit. And, by the way Sakai’s tail was wagging like crazy when he tasted it – I know we’ve found his favorite summer meal!”

Learn more about this campaign at www.merrickpetcare.com/bbq4good.