We use cookies to provide you with a better experience. By continuing to browse the site you are agreeing to our use of cookies in accordance with our Cookie Policy.
Skip To Content
Home » Threats of trade wars predicted to stall global economy in 2019

Threats of trade wars predicted to stall global economy in 2019

According to the Global Economic Forecasts published by market research provider Euromonitor International, global real GDP is forecasted to decline from 3.7% in 2018 to 3.6% in 2019. Growth for advanced economies will also decline from 2.3% to 2.1%, while emerging economies are predicted to remain at 4.7% GDP and will account for 77% of global real GDP growth.

In 2018, the US demonstrated better-than-expected performance, causing the GDP to rise from 2.2% to 2.9%. However, trade disputes with China have called for a reduction of GDP growth to 2.4% going into 2019. 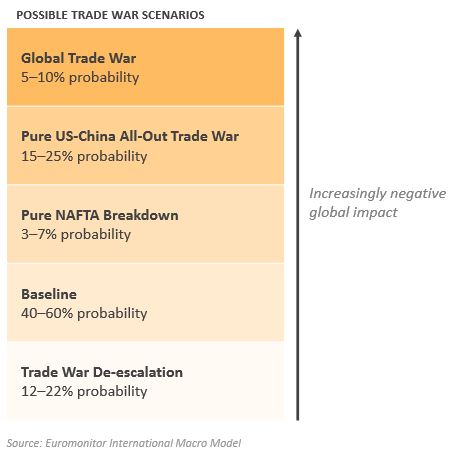 As for negatives, trade war uncertainty tops the list, followed by a rise in protectionism among global trade, peak confidence in private sector in some advanced countries such as the Eurozone, stock market volatility, high global debt, limited monetary policy, slow labor productivity growth and US monetary tightening for the emerging economies.

In sum, Euromonitor concluded the risk of global downturn or emerging markets’ slowdown is heightened due to current global financial market conditions stemming from the Eurozone recession and Italian fiscal policy tensions. In the US, democrats’ taking Congress could diminish the risk of Trump’s trade policies causing a global trade war, but US-China relations continue to pose the risk of an all-out trade war between the two countries.