TEL AVIV, ISRAEL — Insuranks, an online insurance comparison marketplace, released its latest study on US pet purchasing behaviors. According to the company, pet parents within the United States feel that they’ve spent more money on their pets in 2022, in what Insuranks described as “petflation.”

Pet ownership has significantly increased in the United States. According to the American Pet Products Association’s (APPA) 2021-2022 National Pet Owners Survey, at least 70% of US households own a pet, representing about 90.5 million homes. Millennials remain the largest cohort of US pet owners followed by Baby Boomers and Gen X pet owners.

Among the 35% of US households that own a pet, 29% own two pets, 15% own three, 7% own four, and 14% own five or more than five pets, according to Insuranks. The study revealed that about 28% of Americans acquired at least one pet during the peak of the pandemic, from March to December 2020.

For Americans, the top five reasons for getting a pet include companionship, always wanting one, mental health benefits, fun and lifestyle changes, according to Insuranks.

This boom in pet ownership drove the pet industry to achieve its highest level of sales, according to APPA’s 2021 State of the Industry report, reaching $123.6 billion in 2021. Pet food and treat products remain top dog in the space, amassing $50 billion in sales in 2021, a 13.6% increase from 2020.

According to Insuranks, US pet owners spend an average of $109.12 monthly on pet necessities. The most common pet purchases include food, of which all US pet parents purchase; toys (87% of pet owners), litter (57%), enrichment products (49%), vitamins and supplements (46%), and other pet products. 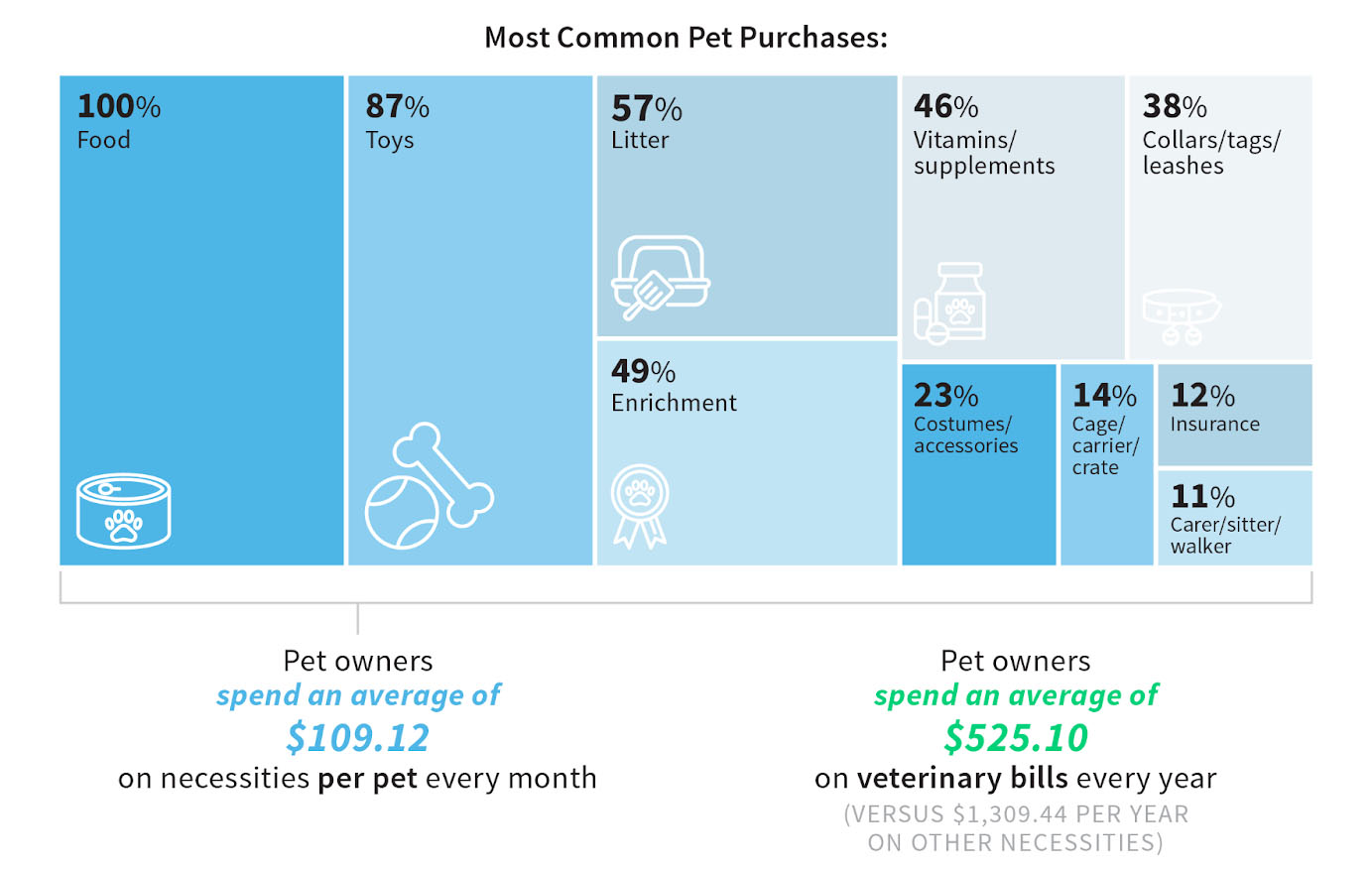 As the need for pet insurance continue to grow in the United States, it may become more common to see pet food companies enter the insurance space.

According to Insuranks, nearly half (49%) of US pet parents feel they’ve spent more on their pets in 2022 compared to previous years. Prices for pet food products continue to rise due to continued supply chain challenges, labor issues and more, causing low supply amidst ever-increasing demand.

Despite increasing costs, pet parents remain committed to their purchasing habits. According to APPA’s latest “Pulse Study: Pet Ownership In The Current Economy,” the majority of pet food shoppers (66%) claimed their pet purchasing habits will remain the same, even if the economy worsens. This sentiment speaks on the shifting nature of pet food spending, with more pet owners considering these purchases a necessity.

US pet parents are going far to meet their pets’ nutritional needs, health and wellbeing, furthering the humanization of pets. Many pet parents’ habits are also furthering the humanization of pets. According to Insuranks, the most popular habits include purchasing Christmas gifts for pets, sharing foods and beverages with pets, celebrating a pet’s birthday, and purchasing premium food and supplements, among many other habits.

As pet ownership continues to rise and an increasing number of Gen Zers become pet parents, the trend toward humanization is expected to continue with pet owners seeking products that mirror those they eat themselves. With this, pet parents may become increasingly willing to spend more on their pets, opening opportunities for the pet food and treat industry to expand its current boundaries in premiumization.