We use cookies to provide you with a better experience. By continuing to browse the site you are agreeing to our use of cookies in accordance with our Cookie Policy.
Skip To Content
Home » Pet food, treat purchasing remains resilient despite economic uncertainty

The American Pet Products Association (APPA) released its latest “Pulse Study: Pet Ownership In The Current Economy” report on Nov. 7, reflecting improved sentiments for the state of the US economy and its potential impact on pet spending.

Economic concerns peaked in June, APPA reported, with 71% of survey respondents (2,013 people) agreeing with the statement, “I think the economy is going to get worse in the next 12 months.” In September, however, pet owners expressed a less severe outlook, with only 60% of respondents agreeing to the same statement. Additionally, 69% reported in September that they were worried about an impending recession, down from 75% in June.

According to the study, slightly fewer pet owners (54%) opted to purchase pet products in-person at a brick-and-mortar store in September compared to June (58%). Still, when it comes to pet food and treats, the majority of pet owners (66%) chose in-person purchasing over omnichannel and e-commerce options.

When it comes to pet vitamin and supplement purchasing, 52% of respondents chose the brick-and-mortar channel in September, down from 57% in June. Roughly 24% of pet owners opted to purchase vitamins or supplements via e-commerce and have them shipped directly to their homes, up from 21% in June, while 14% ordered online and picked up curbside, up from 12% in June, and 9% ordered online and picked up in store, reflecting no change from June. 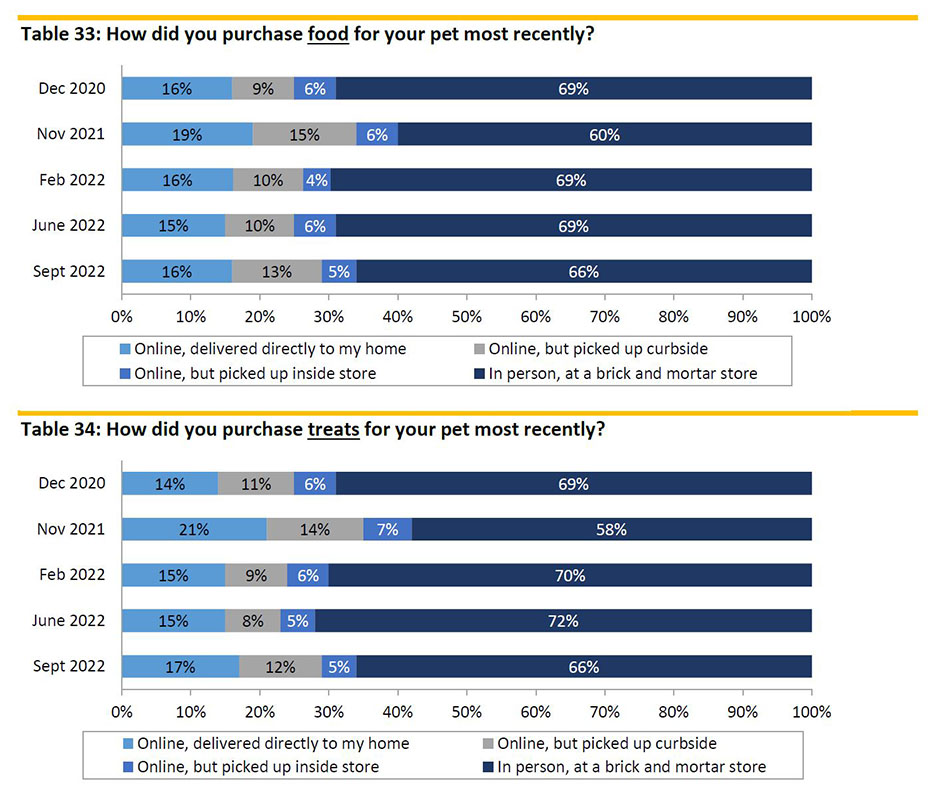 Economic sentiments speak volumes about the non-discretionary nature of pet food and supplement purchases — and even treat purchases — compared to that of other categories, including toys and grooming supplies.