We use cookies to provide you with a better experience. By continuing to browse the site you are agreeing to our use of cookies in accordance with our Cookie Policy.
Skip To Content
Home » Cutting-edge testing technology fuels new cat food brand

Expanding into the pet food market was always a part of the plan for Sean Wittenberg, president and founder of Safe Catch, a seafood brand built on promises of safety, sustainability and transparency, and Pure Cravings, a wet cat food brand cut from the same cloth.

After founding Safe Catch in 2014, Wittenberg and his team spent the last eight years scaling the human seafood business — and fine-tuning the technology that started it all — to support its endeavors to revolutionize seafood-based nutrition for felines.

A proprietary seafood testing method is the founding pillar of both Safe Catch and Pure Cravings. The technology was born of Wittenberg’s quest to ensure safe mercury levels in canned seafood products following a troubling personal experience involving his mother.

In 2004, Wittenberg’s mother started a calorie-based diet program through which she selected and consumed tuna-based meals nearly every day. An otherwise healthy woman, she began experiencing mysterious symptoms and was eventually diagnosed with mercury poisoning.

From that day forward, Wittenberg made it his mission to protect others from the dangers of high-mercury levels in commercial seafood products. He partnered with academic and industry experts to begin the development of a technology capable of quickly and reliably testing thousands of food-bound fish for mercury levels. Kevin McCay, now chief operating officer at Safe Catch, joined the effort in 2006 to lend his engineering background to the effort.

“As we were developing the technology — hardening it and testing it — we had to overcome a lot of hurdles,” McCay said. “We were going into seafood processing facilities and storage facilities that are often super cold and super damp. You have forklifts driving all over the place. So, we had to develop a technology that was going to be robust and accurate. It took us a good 15 years to perfect the technology to the point where we can have enough throughput to be able to scale large volumes in commercial facilities and ensure accuracy.”

The technology was first launched as a method of certification, in which Wittenberg, McCay and their team conducted third-party testing of seafood products for the human food market. It wasn’t until 2013 that they decided to move forward with their own seafood brand, Safe Catch. The team continued to fine tune its technology through 2020, when they submitted it for an AOAC performance tested methods (PTM) certification. That same year, the technology was successfully certified, assuring it was as accurate as the current official US Food and Drug Administration (FDA) method and performs as expected in a commercial setting. 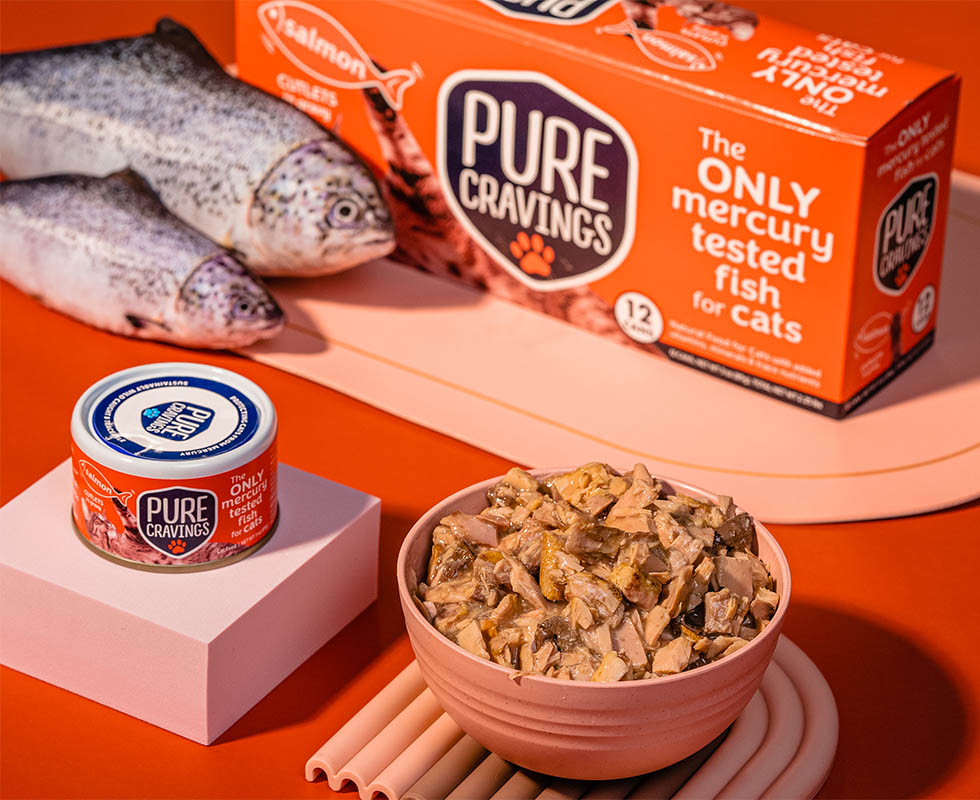 Every single salmon and tuna is tested against strict mercury levels before they are accepted. Smaller fish like sardines and mackerel are batch tested for mercury using a statistical algorithm.

“Part of what makes us so special is this technology is very simple to use,” McCay said. “We take a 50 to 100 mg sample of the seafood tissue, or the edible tissue, and feed it into a sample port within the machine. A species-size mercury profile is selected from a touchscreen. Then, the machine processes everything inside of it, and produces either a green screen or an out of spec screen. If it's in spec, it gets put into the Pure Cravings basket. If it's out of spec, we don't purchase the seafood.

“We're generally at the sorting area as the fish are coming off the boats, so we don't make any commitments to purchase the product until we've had a chance to inspect it for our specifications,” he added.

Plans to launch Pure Cravings began in 2020 with a tentative launch date of 2021, but the COVID-19 pandemic delayed that timeline by about a year. Nevertheless, the mercury-tested wet cat food brand pulled through the pandemic and officially launched in the market in June 2022.

“We always knew that we were going to get into pet food,” McCay said. “We just needed to make Safe Catch a big enough company to be able to sustain the cat food business, to utilize the whole fish in some of our innovation, and to get our volume to where we could launch some real products.”

In developing and launching Pure Cravings, one of the first things the Safe Catch team did was conduct research about the addressable market for mercury-tested wet cat food. Are pet owners as concerned about mercury levels in their cats’ food as they are with their own seafood? How do high mercury levels in a diet affect cats’ overall health and wellbeing? Is pet food a feasible application of the company’s seafood testing technology?

“We did a lot of research, and through our own testing we were able to uncover that heavy metals in pet foods can be up to 670-times higher than in human foods,” said Bond Milburn, national pet food manager at Pure Cravings. “We wanted to be able to take that same purity standard that we're putting into our own food and apply it to the extensions of our families: our pets.”

"...Through our own testing we were able to uncover that heavy metals in pet foods can be up to 670-times higher than in human foods,” said Bond Milburn, national pet food manager at Pure Cravings.

The company sought veterinary input when setting its mercury limit for cat food. Pure Cravings only accepts fish with mercury levels at or below 0.07 parts per million (ppm). McCay explained, because 0.07 ppm is the ceiling, the average mercury levels of all accepted fish and of its finished cat food formulas are often far below 0.07 ppm.

Aside from its mercury-testing focus, Pure Cravings is also built on several other brand promises that resonate with modern consumers: sustainable sourcing, traceability, grain-free and non-GMO. Because Pure Cravings leverages the same seafood supply chain as Safe Catch, all fish used in its cat food formulas are human grade, sustainably caught in the wild, and traceable from sea to can.

The company sources pink salmon from the Northern Pacific, and yellowfin and skipjack tuna from the Pacific Ocean. Once each fish is tested for mercury levels, accepted seafood supplies are moved to a storage and processing facility in Thailand. Finished products are then shipped to the Pure Cravings warehouses in the United States. The company currently operates warehouses on both the East and West Coasts.

Milburn said a large part of research and development for Pure Cravings cat foods was ensuring a premium, quality appearance, so much so that a cat owner might crack open a can and say, “’Okay, I can totally understand why my cat would enjoy this,’” as Milburn put it. 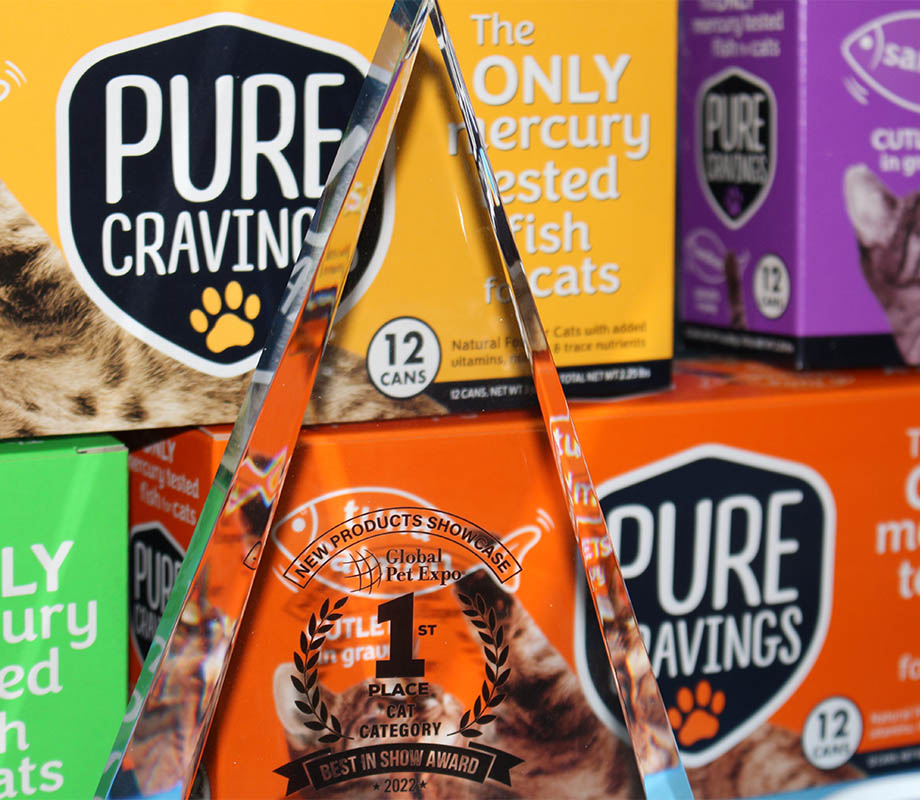 “It doesn't look like your typical over-processed, over-manufactured fish in a can,” he said. “It maintains the integrity of the fish for the cats to enjoy it like they are a part of the family.”

Milburn explained the whole loin, or white meat, of tuna is used for its Safe Catch brand, while the red meat, or the bloodline, is not. The company saw this as a perfect opportunity to utilize the red meat portions, which are often used in pet food anyway, for Pure Cravings cat foods. The company’s current products use the same loin meat incorporated in Safe Catch products, but plans to begin using the red meat and other parts of the fish in future products and formulations.

“We want to make sure as we're scaling up both companies that we’re finding ways to utilize that red meat along with the whole loin,” Milburn said. “It’s all dependent on how much we're producing for Safe Catch and then also Pure Cravings, but we want to make sure that we're finding a way to maximize all of these proteins and utilize the whole fish in our production.”

The company anticipates launching a minced tuna meal topper for cats, which will support the company’s ability to repurpose the secondary products of its production. This includes the bloodline, or red meat, as well as juices and trappings that contain key nutrients but would otherwise go to waste.

“Through all of that production, we end up with a lot of fish juices and trappings that we want to be able to incorporate into other lines down the road, making sure that we're really amplifying those levels of Omegas for skin and coat support and boosting the nutrient profile of the line,” Milburn said. “For the sardines and mackerels, we use the whole fish already in our Cutlets in Gravy line, and we'll continue to do so. That’s the whole fish, including skins and a nice boost of the Omegas.”

Minimizing waste and maximizing nutrition, all while ensuring protection from high-mercury seafood, will continue to be the guiding principles of Pure Cravings.

Going forward, the mercury-tested cat food company will continue to innovate and build on its existing portfolio. This includes the creation of a cat food line that incorporates land animal proteins alongside seafood proteins. Milburn said nutritional due diligence must be done to make this addition, including ensuring the company is sourcing only the best, hormone- and antibiotic-free land animal proteins available. 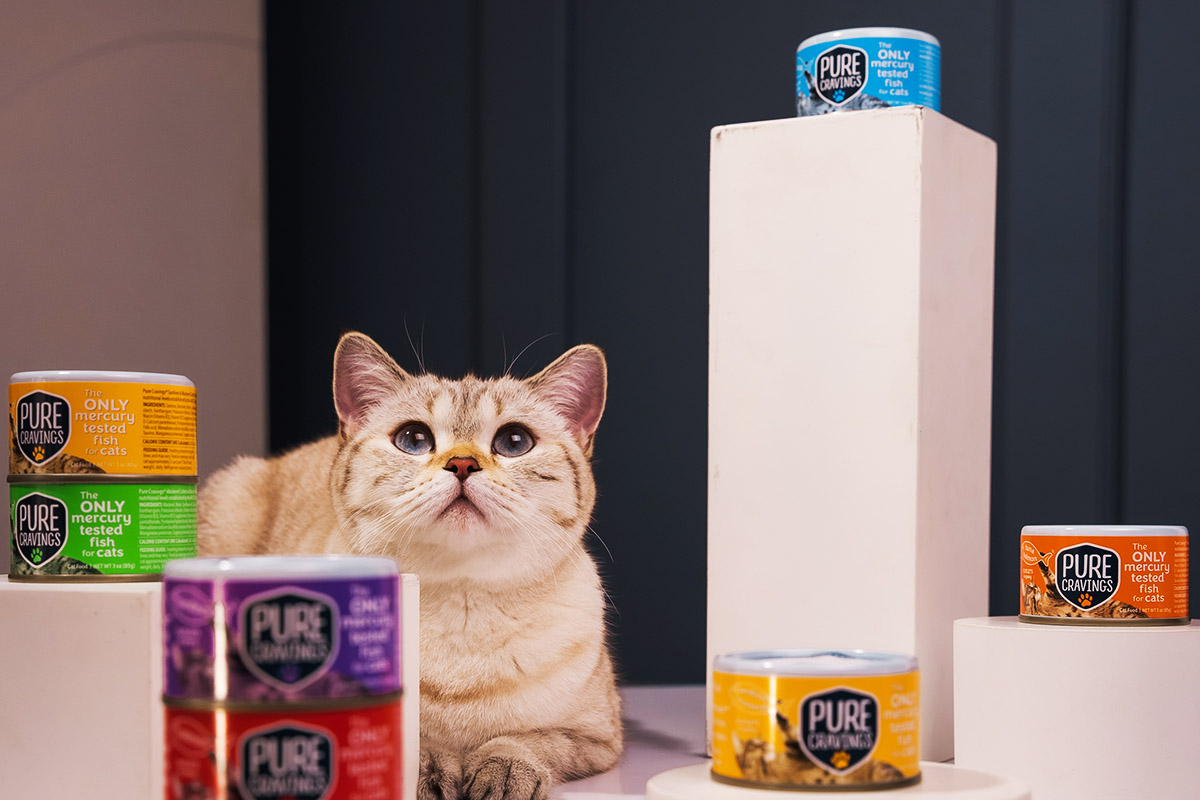 Pure Cravings' hallmark may be its mercury testing capabilities, but the brand is also committed to sustainability, traceability and quality. Future innovations will focus on using "the whole fish."

“Down the road, it is it is on our radar to look at incorporating a mercury-tested fish meal when we look at going into kibble,” Milburn added. “It’s not going to be in the immediate future, but it is something that we are looking at.”


Challenges and opportunities ahead

Although Pure Cravings’ flagship product line is “Cutlets in Gravy,” the process of transporting products overseas to the United States isn’t always “all gravy.” The ocean freight crisis has impacted many brands’ ability to get product into the United States in an economical and timely manner. Exorbitant prices for shipping containers, uncertainty with certain carriers and congestion at US ports are all obstacles Pure Cravings is currently facing and will continue to face in order to compete in the American pet food market.

“Thankfully we had the foresight to know that we would need to build our Safe Catch business to enable us to have the resources, the volume, the connections, the sourcing, and all that goes into a successful pet food brand,” McCay added. “I think having that foresight and experience helped us weather the storm, along with some luck of recruiting really great personnel to our logistics crew in Thailand.”

After winning Best in Show in the Cat Category of Global Pet Expo’s 2022 New Product Showcase awards, Pure Cravings is looking to expand its presence in the US cat food market.

The mercury-tested cat food company is focusing on the pet specialty retail channel, aiming to not only provide a safe, transparent and premium wet cat food option to consumers, but also to establish relationships with independent pet retailers that can inform product development and ensure the brand’s technology is meeting pet owners’ needs and expectations.

For example, as sustainability becomes increasingly important to pet owners, Pure Cravings has developed shipping and product packaging to meet this need. All cans are easy-open to offer convenience to consumers, and there are no plastic components. Plastic has also been eliminated within Pure Cravings’ shipping palettes. The company has also partnered with rePurpose Global, through which it has pledged to remove as much plastic waste from the ocean as it produces annually.

“We have the technology, and we have the processing capabilities to make great products,” Milburn said. “We want to hear and understand what the retailers and pet parents want, so we can use our technology to fill their needs.”

The company is currently seeking distribution and retail partners in the United States and is welcoming new opportunities to help bring its products to market.