We use cookies to provide you with a better experience. By continuing to browse the site you are agreeing to our use of cookies in accordance with our Cookie Policy.
Skip To Content
Home » Carnivore breaks ground on new HQ, manufacturing plant

GREEN BAY, WIS. — Just 10 years after Lanny Viegut founded Carnivore Meat Company using custom-built freeze dryers to produce freeze-dried and frozen raw pet food, the Wisconsin-based manufacturer broke ground at the site of its future 235,000-square-foot headquarters and manufacturing facility in Green Bay’s Grandview Industrial Park on Aug. 8. The processing side of the 28-acre complex, which will house 36 proprietary, next-generation freeze dryers to produce Carnivore’s flagship brand, Vital Essentials®, as well as other private label and co-manufactured freeze-dried pet foods, is expected to be operational by the end of 2023.

“I would have never guessed 10 years ago that we’d be in the position we are today with regard to playing a leadership role in this category in the industry — helping to support and supply product for a growing category that’s really on fire,” Viegut said. “No one would have guessed that we’d be here today. Many people thought there was an opportunity for the freeze-dried/frozen, ultra-premium category, but nothing like what we’re experiencing today.”

The company currently employs 200 people in its four processing locations and one warehouse in the greater Green Bay area and plans to add 150 new jobs over the next five years including automation specialists and engineers. 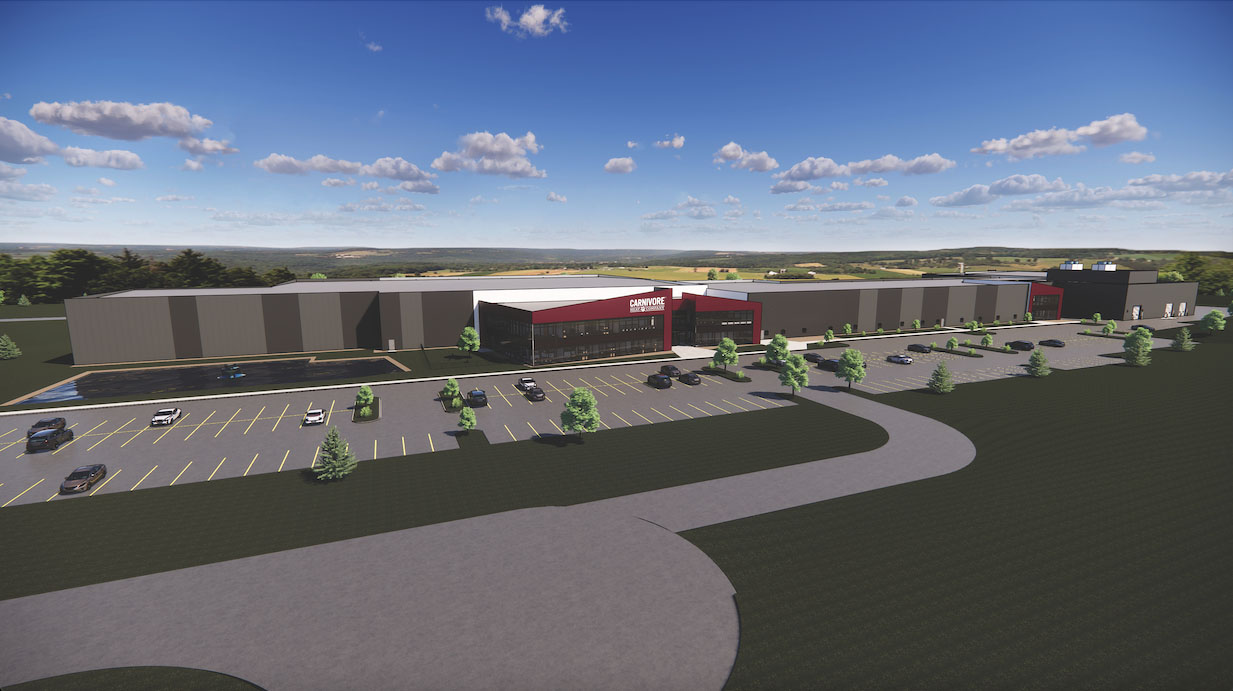 Aside from housing its custom-built freeze dryers, the new greenfield plant will feature high-speed automation and robotics as part of its state-of-the-art operations.

“It’s no secret that as we look a few years into the future, the labor pool will be rapidly decreasing. We are anticipating this as we build this facility,” Viegut said. “Automation and technology are heavily worked into the plans for this new facility.

“The plant will be set up for high volume. We plan to leverage high-volume, long runs with our use of automation and robotics,” he added.

When the plant is fully operational, the new dryers, alongside additional investments into existing Carnivore facilities announced earlier this year, will yield a six-fold increase in the company’s production capacity from its 2021 amounts.

In addition to production, packaging and office space, the new location will also house an in-house Innovation Center to help with product development for the company’s Vital Essentials brand, as well as research and development pertaining to current and potential customers.

“We’ve utilized other spaces to do innovation and pilot projects in the past, but this new Innovation Center will be purposely and intentionally developed for innovation and for creating new products for our brand and our customers,” Viegut said.

The 27,000 square feet of office space at the new headquarters will be constructed with sustainable materials and energy-saving features. The facility will also feature a dog run, dog wash stations and other pet amenities.

“Part of growing as a company includes creating an environment people want to work in,” Viegut said. “We have always had a pet-friendly culture and this new facility will enhance that offering, making work an accessible place not only for our team members but also their four-legged companions.”

Private equity firm Arbor Investments announced its investment and partnership with Carnivore last December. Soon after, the company acquired its fourth production facility in the Green Bay area. After the new facility is built, the company will have four production plants and one warehouse operating in Green Bay.

“We are honored and thrilled to work hand-in-hand with the Carnivore team on one of the most ambitious capital projects Arbor has undertaken to date,” said Chris Tuffin, partner at Arbor Investments. “This initiative to provide transformative growth capital exemplifies Arbor's conviction investment philosophy, and the new campus will be critical to helping realize the game-changing growth vision we share with Lanny and the Carnivore team.”

Schuh Construction, who has worked with Carnivore on many projects throughout the years, will lead construction of the new facility.

While the 235,000-square-foot plant has the potential to help Carnivore achieve growth six times above its current levels, Viegut isn’t planning on stopping if and when the facility reaches capacity.

“The goal is to never reach full capacity,” he said. “Our new 235,000-square-foot plant is just Phase 1. We have the ability to double or triple the facility in the long run. It’s built for the future.”