We use cookies to provide you with a better experience. By continuing to browse the site you are agreeing to our use of cookies in accordance with our Cookie Policy.
Skip To Content
Home » Student research points to functional uses of green banana flour in cat food

Hsu was one of three graduate students selected by AFIA to share her research during the annual conference. Her research was focused on the chemical composition of green banana flour, how it affects texture and color in canned diets for felines, and digestibility, metabolic and fecal characteristics related to the study. The study was supported by Simmons Pet Food. Clare Hsu, graduate student at the University of Illinois, studies resistant starch in feline nutrition, hydrolyzed and plant proteins in canine nutrition, and the effects of extrusion on protein quality. (Source: LinkedIn)

Hsu opened by noting the popularity and accessibility of bananas. Unripe bananas can be dried into green banana flour, which has been used in human food applications as a gluten-free substitute for wheat flour, she explained.

“It is low in sugar and starch and high in fiber – resistant starch type two, to be specific,” Hsu said. “Typically, in green banana flour, there is 30% to 50% of resistant starch. These huge benefits for human health could also be translated into the companion animal nutrition industry.”

The ingredient can also serve as a natural thickening agent during processing, or as a color additive for light brown applications, Hsu said.

With this knowledge of the chemical composition of green banana flour, Hsu and her team conducted a feline feeding trial. The trial included 40 domestic cats with an average age of 5.7 years old and an average body weight of 5.3 kgs (11.7 lbs). The cats were randomly assigned to five treatment groups of eight cats. The first group was fed the rice flour control diet, the second group was fed the potato flour control diet, and the other three groups were fed diets with varying percentages of green banana flour.

All diets had similar chemical compositions, and Hsu stated there was no difference seen in food intake across all three diets.

The diets were then analyzed for texture parameters, including hardness, cohesiveness, springiness, gumminess, and resilience, as well as color based on brightness, greenness, redness, blueness and yellowness. 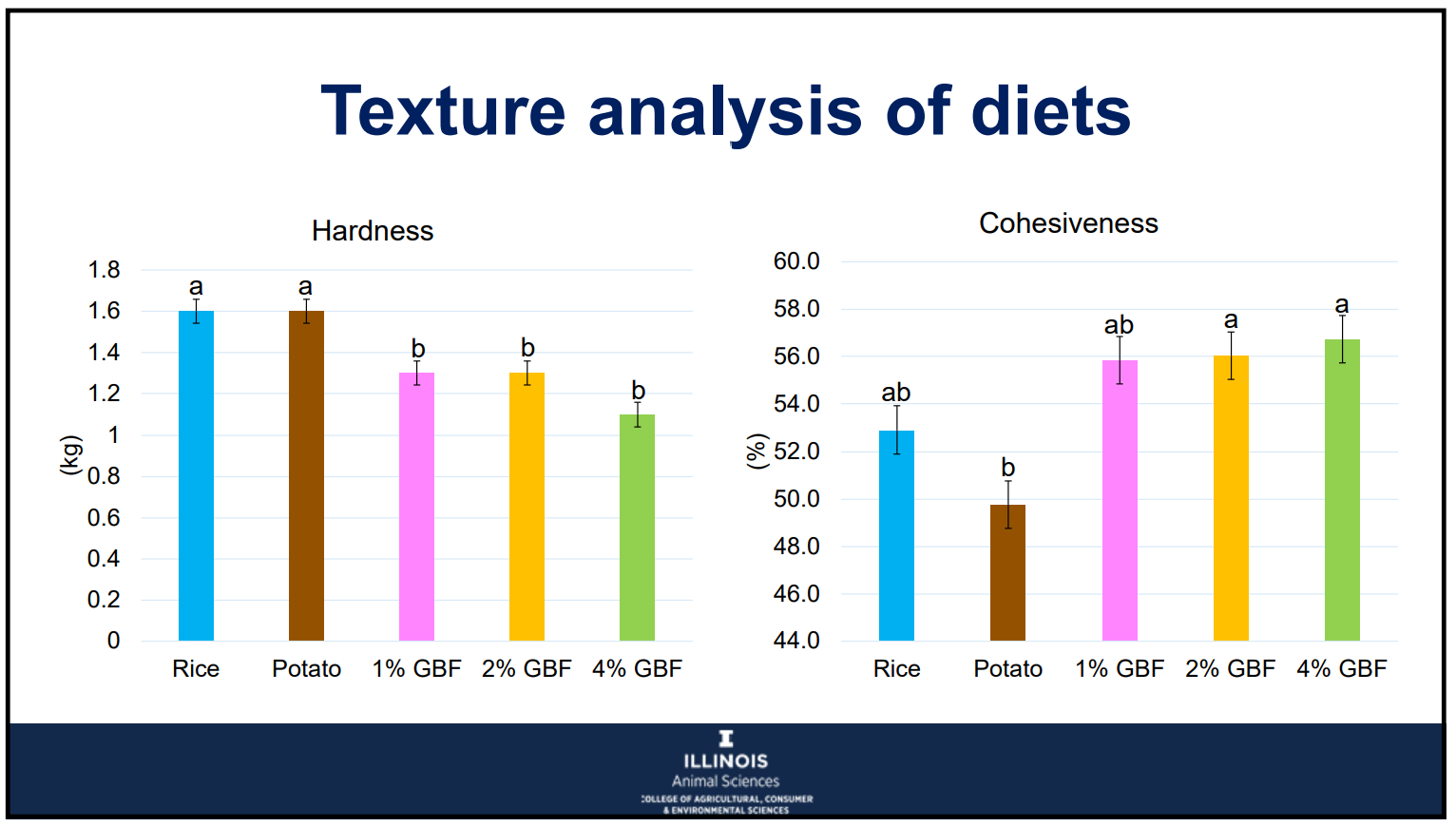 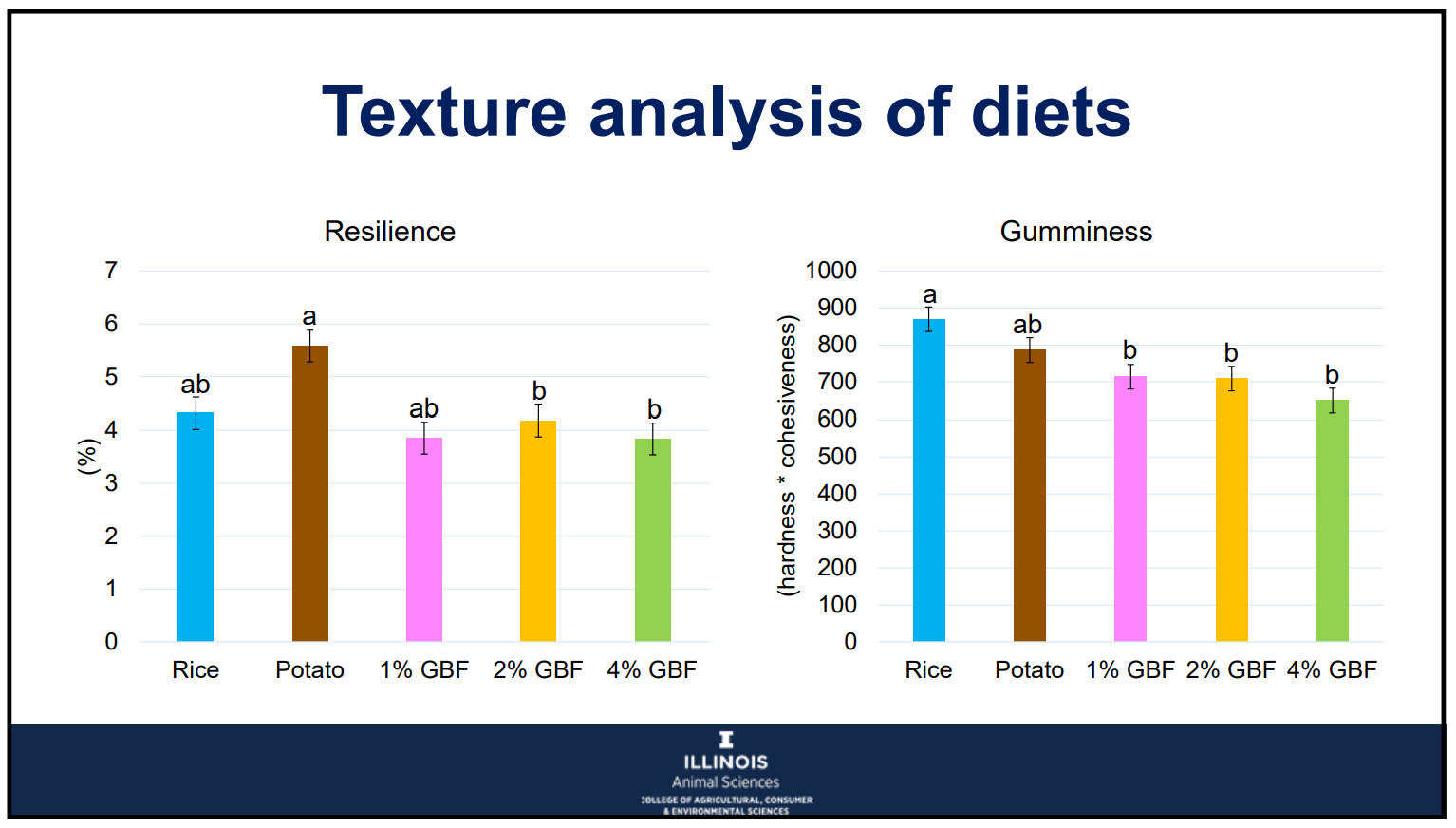 “From the approximate analysis we can see that the green banana flour is high in resistant starch, which is indigestible, so it could be a good source of fiber for companion animal nutrition and fiber has benefits for gut health,” Hsu said. “From a more manufacturing standpoint, we can see that from the color and texture analysis that adding green banana flour affected the texture and color; it had a lower hardness and a higher cohesiveness. Whether this is beneficial or not really depends on the manufacturer.

“For the color we saw that adding 4% of green banana flour made the diet a darker brown, which could be beneficial for some formulas — for example, the ones with red meat — just to increase the customer appeal,” she said. “From a nutritional standpoint, there was no difference seen in nutrient digestibility, fecal characteristics and metabolites, so we can say that the green banana flour is comparable to traditional starch sources like rice and potato, which could also be formulated into the diet.”

In conclusion, Hsu stated the use of green banana flour does affect texture and color in a canned food, and the performance of diets containing green banana flour was comparable to more traditional starch sources. Applications would be discretionary based on specific target product specifications, but the fact that green banana flour is more of a “novel ingredient,” according to Hsu, could gain traction with label-conscious consumers and increase tag appeal.