We use cookies to provide you with a better experience. By continuing to browse the site you are agreeing to our use of cookies in accordance with our Cookie Policy.
Skip To Content
Home » Dog ownership trends posing opportunities for pet food, treat makers

ROCKVILLE, MD. — Who runs the world? Following more than a year of increased time spent at home for many, which has translated directly to pet owners paying more attention to treating their pets and making them as comfortable as possible, one safe answer is: dogs. This may have even been the case pre-pandemic, but COVID-19 era pet adoption trends and purchasing behaviors have accelerated pet humanization and established premiumization as a lasting trend.

To highlight National Dog Day, Aug. 26, here are some US dog ownership trends that are likely to shape the future of the pet market.

Currently in the United States, Packaged Facts estimates roughly 54% of the population owns at least one pet. Among these households, 44% own at least one dog. Positive pet adoption trends seen during the COVID-19 pandemic grew the number of dogs living in America to approximately 96 million in 2020, up by more than 10 million compared to the dog population in 2019. In comparison, the US cat population grew just 2 million from 2019 numbers to reach 32 million in 2020.

“Pet acquisition trends have remained positive in 2021, according to David Sprinkle, research director for Packaged Facts, if not as supercharged as in the near-term wake of COVID-19.”

An increased dog population means more dogs needing a greater variety of nutritional products, which means more opportunities for brands to mark their territory in this growing market. Additionally, a significant portion of the dog population is aging, with more than half (55%) of dog-owning households in the United States currently owning a dog that is 7 years old or older. The share of households owning senior pets has risen 10 percentage points to 55% since 2014.

This presents an opportunity for elaboration on a market trend that is already well-established — age-specific pet food formulations — as well as a more emerging category — functional or solutions-based formulas — which can easily target geriatric dogs with increased needs for products that support mobility and skin and coat health.

Packaged Facts also pointed out that dog ownership trends over the last decade are attributable to demographic cohorts that have been “traditionally under-represented as dog owners,” including the number of dog-owning households without children in the home, ownership among retiree households, never-married adults, and adults ages 65 to 74.

This shift was attributed to an aging general US population, shifting household dynamics and compositions across the country, and an “increasing appeal of dog ownership to demographics traditionally less prone to keeping pet dogs,” the market research firm reported.

The number of dog-owning retiree households was up 67% over that time, while the number of retiree households in general was up only 35%. Dog ownership among never-married adults is up 32% over the last decade, while this demographic (regardless of pet ownership) grew only 22% over the same period. Additionally, dog ownership among adult households between the ages of 65 and 74 grew by a whopping 78%, while this demographic in general grew just 60% over that period.

Larger dogs are seen in a larger portion of today’s dog-owning households in the United States. Since 2016, ownership of small dogs has declined steadily, while ownership of medium and large dogs has grown. 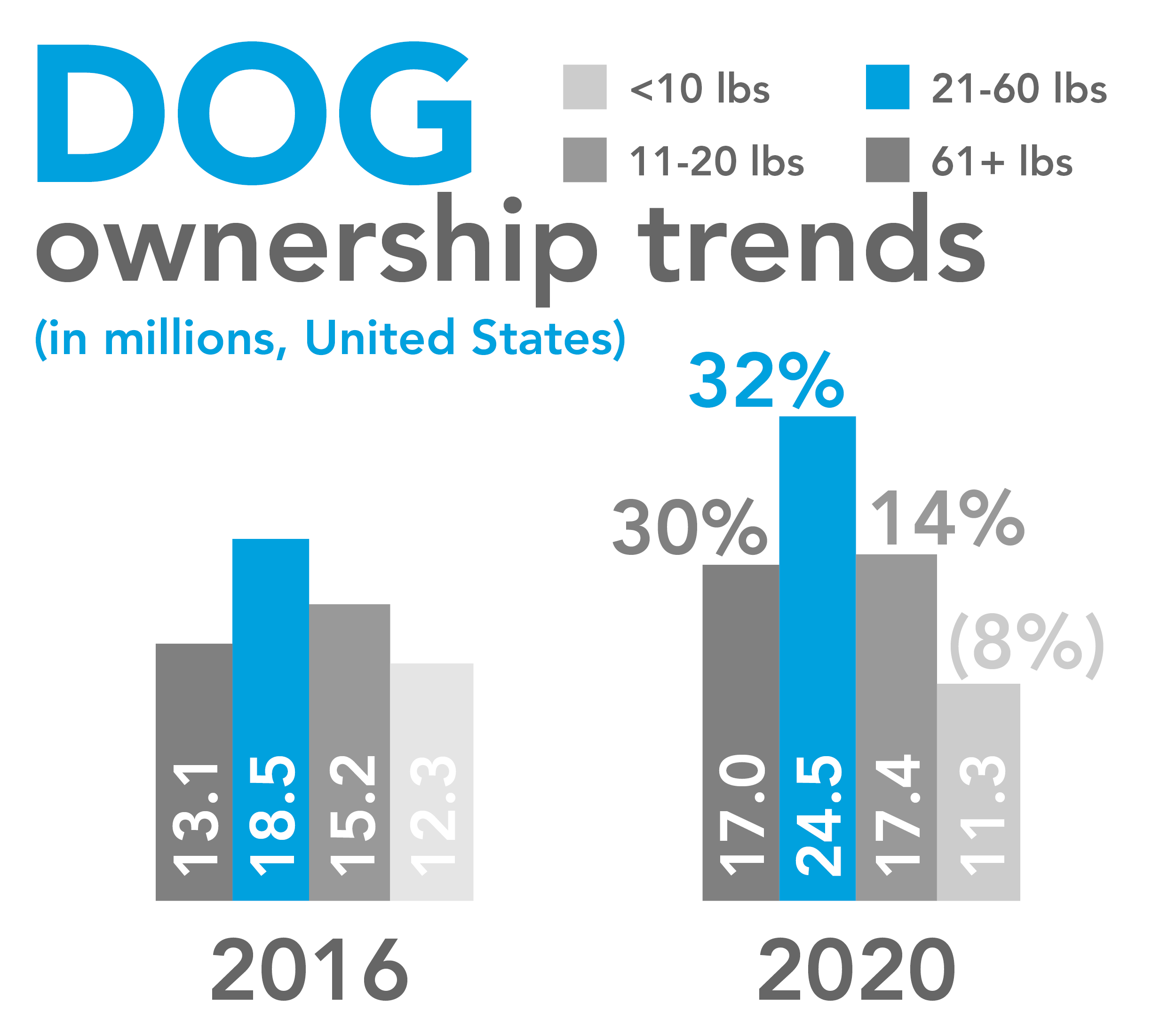 Source: Packaged Facts, “US Pet Population in the Wake of COVID-19,” Table: Dog Population by Size of Dogs, 2016-2020 (number of dog-owning households)

While in many ways 2020 (and 2021) may be seen as an anomaly, the pet industry remained resilient and “recession-proof,” and many firms are describing trends seen over the last two years as “sticky,” or here to stay. These population trends, paired with age-related trends in dog ownership, continued premiumization and humanization, paint a clear picture of opportunities for age-specific, breed- or size-specific, and functional pet food and treat formulations in the years to come.