We use cookies to provide you with a better experience. By continuing to browse the site you are agreeing to our use of cookies in accordance with our Cookie Policy.
Home » Freshpet hikes 2021 sales guidance to $445 million

SECAUCUS, N.J. — Freshpet, Inc. has raised its 2021 net sales goal by approximately 40% over 2020, upping the ante from $430 million to $445 million following another quarter of sales growth in the mid-30% range. The company shared its second quarter 2021 earnings on Aug. 2 for the three-month period ending June 30.

The new full-year net sales guidance is expected to result “in a growth rate of 40% for the year and a second half growth rate of 44%,” said Billy Cyr, chief executive officer and executive director, in an Aug. 2 earnings call. Freshpet’s full fiscal year guidance for adjusted EBITDA remains the same as previously stated at $61.0 million, which would be an increase of 30% from 2020.

“This guidance implies that 2021 will be our strongest year of growth since we went public in 2014 and also implies that our back half growth will be in excess of 44%, setting us up with considerable momentum as we transition into 2022,” said Heather Pomerantz, chief financial officer.

Both gross profit and adjusted profit figures as a percentage of net sales were down in the second quarter, to which Freshpet attributed beef cost inflation and increased processing costs due to expanded production.

Selling, general and administrative expenses (SG&A) were $49.6 million for the quarter, or roughly 45.6% of net sales, and up roughly 3% from year-ago SG&A expenses. Freshpet cited “increased logistics costs… offset by general and administrative expense leverage due to higher net sales.” The company incurred roughly $700,000 in COVID-19 related expenses over the quarter.

E-commerce sales for Freshpet were up 46% over the quarter versus year-ago online sales, now amounting to 5.6% of net sales. Roughly 55% of e-commerce sales were made through “click and collect” (or buy online, pick up in-store) platforms including Walmart, Petco, PetSmart, Kroger and Clicklist, while 28% of online sales were through last-mile delivery services such as Shipt and Instacart, and 17% of online sales were made through online fresh delivery services including Amazon Fresh and Peapod.

The company launched on Chewy.com in July and, while it is too early to tell the impact on business, Cyr reported “we are encouraged by the potential.”

In brick-and-mortar, the company is on track to add fridges to 1,000 new stores by the end of its fiscal 2021, with 265 new points of sale established over the second quarter. Freshpet also added a second fridge to 510 stores and upgraded fridges at 324 retail locations over the quarter.

“We are also anticipating significant increases in stores and second fridges next year based on our increased supply and rapid growth,” Cyr said.

Outside of the United States, Freshpet’s international business grew 48% over the quarter compared to last year, thanks to strong momentum in the United Kingdom and Canada.

The company continues to deal with product shortages and inefficiencies caused by new staffing efforts and increased freight costs, although those issues have improved from last quarter.

“We are on our way, however, and our strong production performance is enabling us to rebuild our internal inventories so that we can better service our customers,” Cyr said. “…Despite our out-of-stocks and delayed start to marketing this year, we still grew household penetration by 19% in the second quarter, and the buying rate grew at a very high rate of 12%.”

Cyr stated in the earnings call that Freshpet produced 44% more in terms of lbs than in the second quarter of 2020.

“This enabled us to generate 36% more in net sales than the year ago quarter while also beginning to restore our in-house inventory, adding approximately $5 million of net sales value of finished product inventory to our quarter-end inventory versus where we began the quarter,” he said.

The company refilled roughly $8 million in trade inventory due to improved production over the quarter, Pomerantz added.

Freshpet’s many capacity expansion plans are on schedule, including the startup of a 24/7 bag line at its Kitchens 2.0 in Bethlehem and plans to add a 24/7 roll chub line at that same facility later this month. The company will move some employees from its Kitchens 1.0 to the 2.0 location to facilitate these new lines.

A second line at the company’s Kitchen South facility will begin running in September and is expected to begin churning out products by the end of the third quarter. A third line will be added in January 2022.

“That line will also be our first test of the new cooking technology that, if successful, would allow us to produce twice as much product in a significantly smaller footprint,” Cyr said. “If that plays out the way we expect it to, it will form the foundation for Ennis Phase 2 and for the second building at Kitchen South.”

The company plans to start production in Ennis, Texas in the second quarter of 2022, and has already begun the hiring and training process for that facility. 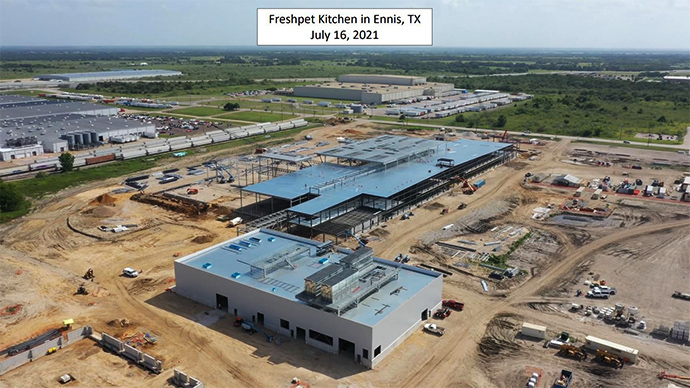 “By the time we start up the Ennis Kitchen, we expect to have approximately 50 experienced employees to lead the startup between those who choose to transfer from Pennsylvania to Texas and those who did several months of training in Pennsylvania,” Cyr said. “That will greatly reduce our startup risk.”

The company also opened a distribution center in Dallas in July, which will help service the Ennis facility once it is up and running. The company will run a “test phase” at the center, shipping product from its Bethlehem plant to test and prepare for the Ennis opening.

“That DC [distribution center] will not only enable us to have lower freight costs in a large part of the US, but it will provide some insulation from the labor and weather issues we have experienced in our Pennsylvania DC,” Pomerantz said.

Cyr said the company expects to increase its prices later this year to cover inflation and significant labor cost increases.

“Our price increases will be very noticeable to consumers because we don't do any merchandising, thus we can't reduce that,” he explained. “And we believe that downsizing our packages will be disruptive to consumers who expect a bag or roll to feed their pet for a set number of days.

“As such, we are being very thoughtful about the price increases we are taking, considering the strategic role of each item in our line, the underlying profitability and the anticipated cost increases we are seeing. We have a successful track record of doing this before and are comfortable doing it again.”

“We're doing every single thing we can to position that very specifically to win against millennial and Gen Z,” Morris said.