This article was published in the March 2020 issue of Pet Food Processing. Read it and other articles from this issue in our March digital edition.

Today’s trending pet food formulations featuring high meat content and a broad range of ingredients are a challenge to extrude. Preconditioners are a vital tool delivering product consistency to the extrusion process.

Preconditioning is a preliminary treatment of raw materials before extrusion cooking to ensure a homogeneous pre-cooked mix on a continuous basis.

As formulations evolved, preconditioners were developed “to respond to process requirements, improve product quality and increase the capacity of the extrusion systems,” he added.

In high-volume processing, control of the process is important. As more fresh, high-moisture-content ingredients are added to pet food formulations, it becomes more challenging to uniformly mix the large volumes of wet ingredients with the dry before transferring to the extruder. Preconditioners help extruders have better control of the finished product.

“By starting the cooking process in the preconditioner by ‘warming’ the recipe before it enters the extrusion barrel, the operator is able to reduce the amount of energy that needs to be transferred into the product while in the extruder barrel,” Tramp said. “This, in turn, allows for improved control of the cooking step and the opportunity for increasing the consistency of the final product attributes.”

Tramp pointed out that product flexibility is also increased.

“For example, the more homogenized the mix is then the possibility for smaller particle size can be present, which in turn can create unique final product attributes that may be otherwise unattainable,” he said.

Better process control can have a large impact on overall process efficiency, but preconditioners can help with the little things as well.

“Rework is often driven by fines creation, which is often most prevalent in non-homogenized product,” said Adrian Martinez-Kawas, international project manager, Corporate Project Services, a division of Wenger. “The homogenization that the preconditioner offers can have a positive direct effect on the final product stability and structure.” 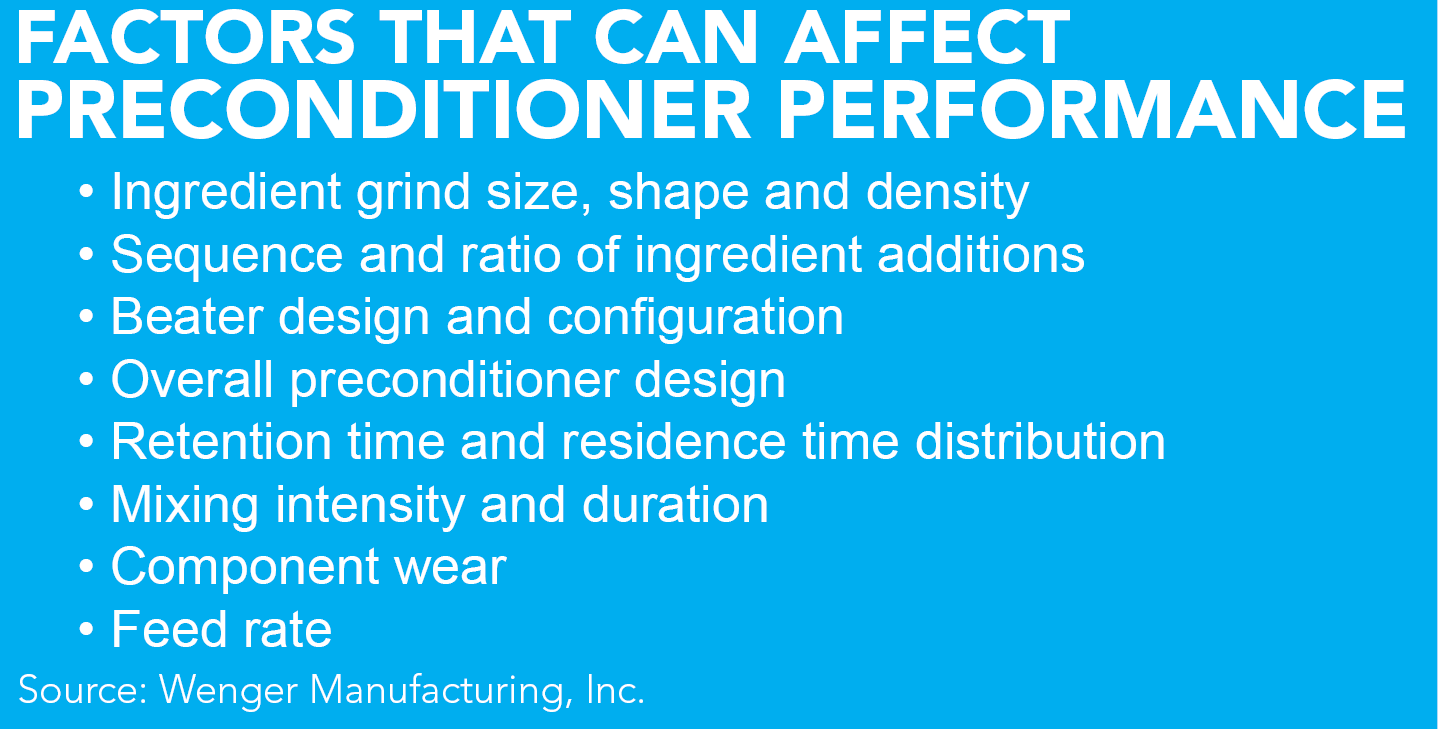 Martinez-Kawas went on to explain that the coefficient of variation (CV) is a statistical number used to measure how well a recipe has been mixed together. The lower the CV, the more homogenized the mix. He said modern preconditioners have taken steps to reduce the CV of a mix. Specifically, the ability to have two mixing shafts with independent speed, circumference and direction of rotation has shown to improve the CV of a mix while also allowing for the ability to vary retention time within the preconditioner.

Maximum efficiency of a preconditioner is attained when it is running at the lowest possible CV and creating the most homogenized mix of ingredients.

“In short, the design of the preconditioner should create the most ‘chaos’ possible and still maintain FIFO [first-in-first-out] as much as possible when it comes to retention time distribution of the mix, which will, in turn, provide for the highest level of homogenization of the mix as it enters the extruder barrel,” Martinez-Kawas said.

Lavocat explained, “Clextral’s preconditioner has a proprietary design to ensure homogenous mixtures:  a filling control device with a specially-designed screw inside the tank that favorably modifies the flow by enabling a partial and controlled recycling of the material being processed, from the outlet to the entry point. This action intensifies the mixing functions and maximizes heat and mass transfer, in particular in the first third of the mixing chamber which is the preferential zone for steam injection. To achieve this, the various adjustable water and steam injection ports have been positioned — axially and angularly — to enhance absorption and product exposure time during the mixing stage.”

Additionally, “an easily accessible and hygienic design enables fast and proper cleaning procedures,” he said. “This helps ensure food and feed safety, as well as increases productivity by reducing cleaning and changeover time, and the need for maintenance.”

“Modern recipes often look to incorporate ever-increasing levels of moisture due to the addition of meat slurries,” Tramp said. “If this moisture and product particles are allowed to escape the preconditioner, it can present significant sanitation challenges in the surrounding area. The most modern preconditioning technologies look to address this issue through maximizing the direct injection of steam into the product while simultaneously protecting against particles being allowed to vent from the preconditioner.”

For certain applications, both product output and quality are considerably enhanced by the use of a preconditioner prior to the extruder.

“Preconditioners are widely used for extruded pet food kibble production in order to maximize throughput of the extrusion unit and the quality of the pet kibbles,” Lavocat said. “Typically, preconditioners are not used for pet treat manufacturing.”

Martinez-Kawas said preconditioners are paramount for recipes with moisture above 18% such as the high-meat and high-fat specialty products found in the market today.

“Without the preconditioning step, uniform distribution of moisture will likely be compromised, resulting in opportunities for clumping, out-of-spec product and discoloration of the final product,” he said.

Although product is warmed in preconditioners, the kill step or final cook temperature is typically reached in the extruder.

“Broadly speaking, the target temperature (in preconditioners) is from ambient to 100 C, and the target moisture levels are highly recipe-specific but range from native to 30%, in some cases higher,” Tramp said.

For food safety, modern extruders are considered the final critical control point, so it is advantageous to have zones separating them from the downstream process, Tramp explained.

Quality preconditioning devices play an important role in the uniformity of the recipe as it enters the extruder cooking step.

“The more uniform the ingredient hydration and heating are the more consistent of a result can be planned for and achieved,” Martinez-Kawas said. “Without a preconditioner, the attainable rates would be as much as 15 to 20% lower and thus margins would be much less.”

Beyond the process benefits on product quality, the material going into the extruder from a preconditioner is already moist and therefore less abrasive, reducing wear on the extruder parts, Lavocat said. 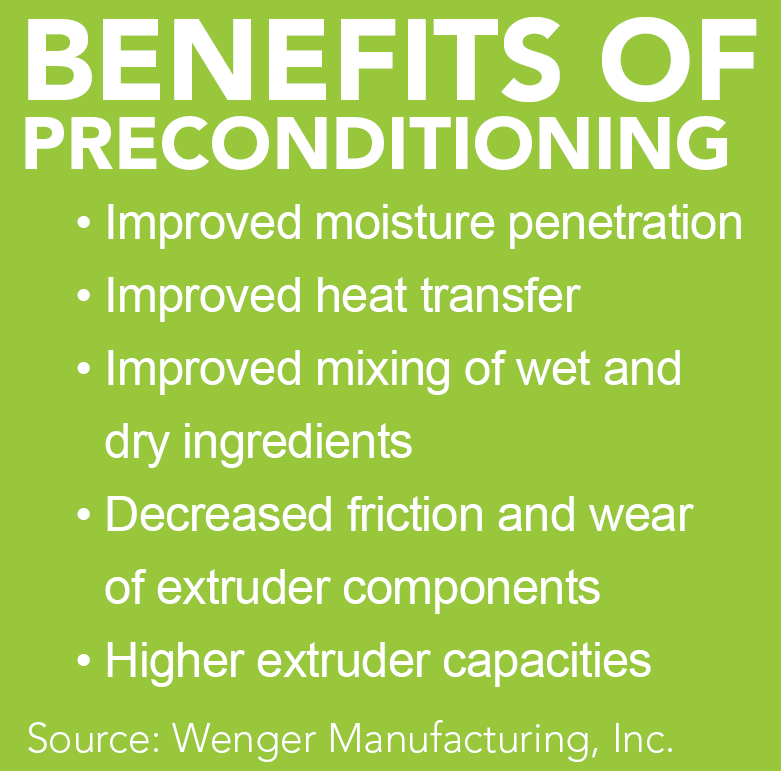 “Variable-speed devices make it possible to adjust the residence time as required and thus adapt the equipment to different types of recipes,” he added. “The efficient pre-cooking enables a reduction of the shear and the torque used in the extruder, which also is beneficial in reducing the wear of the screws and barrels.”

Realizing the full benefit of a preconditioner for the wide variety of formulas required in today’s pet food market can take some fine tuning. The target temperature for the product leaving the preconditioner and the desired moisture content depends heavily on each recipe and the type of kibble being produced.

“The best way to evaluate [a preconditioner] is to test it associated with an extruder in real conditions,” Lavocat said. “To operate a preconditioner at maximum efficiency, the right balance between mixing/agitation, residence time, filling ratio and thermal energy has to be found.”

Lavocat reiterated that preconditioners are an important piece of equipment for the pet food extrusion process.

“A fine and efficient optimization of the preconditioning operating conditions requires some time and effort but is well worth the benefits it can bring to the process and product quality,” he concluded.