We use cookies to provide you with a better experience. By continuing to browse the site you are agreeing to our use of cookies in accordance with our Cookie Policy.
Home » Recapping SuperZoo: new product and trends

By Jordan Tyler and Jennifer Semple

LAS VEGAS — SuperZoo 2019, hosted by the World Pet Association at Mandalay Bay in Las Vegas from Aug. 20 to 22, was packed with new pet food and treat products from a multitude of brands, from those using all human-grade ingredients to high-meat inclusions and even a new vegan dog diet. Here are some trends and products that stood out to the editors of Pet Food Processing as they walked the show floor.

In light of the US Food and Drug Administration’s (FDA) latest report on its ongoing investigation into the alleged connection between dilated cardiomyopathy (DCM) and grain-free diets, some brands have re-embraced grains as a wholesome and ancestral source of nutrition.

Wellness released CORE with Wholesome Grains dog food diets, featuring four formulas with high-quality animal proteins and grains such as barley, quinoa and oats. In addition, the brand introduced four other recipes under its new CORE RawRev with Wholesome Grains line, which are formulated with the same grains but include morsels of 100% freeze-dried animal meats mixed in with the traditional kibble. 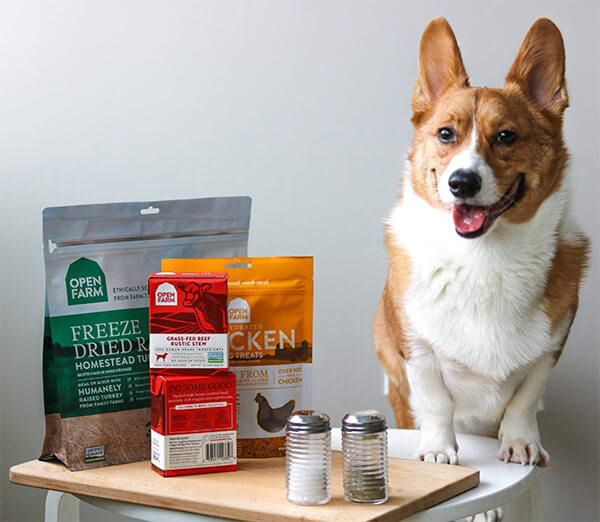 Pets Global is preparing to release a new line of pet food, Inception, which will include selective grains. The food is marketed as “meat first, grain friendly,” as well as “legume-free,” and will consist of dry pet foods with at least 70% protein in each formula.

The potential that some of the FDA’s DCM cases could be linked to taurine deficiencies possibly attributed to the inclusion of higher amounts of legumes, potatoes and peas in dog diets in place of traditional grains has some brands highlighting the addition of added taurine in their formulations.

For example, Caru has reformulated its Daily Dish and Original lines of stews for dogs to include added taurine, although the complete-and-balanced diets also offer meat and grain-based protein. 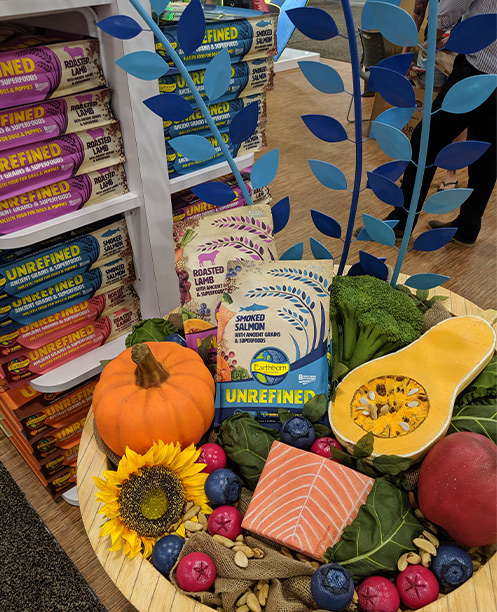 Midwestern Pet Foods brand Earthborn Holistic released its Unrefined line at the show, which is formulated to support heart health and features added taurine, ancient grains and superfoods, such as kale, pumpkin, spinach and blueberries. It will be available in two recipes: fresh salmon and rabbit.

While many brands are pointing out the addition of added taurine, some brands have always had taurine on their radar. Purina’s formulas have traditionally been supplemented with the amino acids.

To promote rotational feeding across wet and dry diets, complementary formulas have been introduced by a few companies. Pairing similar wet and dry diets is a way to ensure pets get the hydration they need.

Zignature, a Pets Global brand, released a treat extension to its dry and wet pet food lines, Ziggy Bars, after years of development and requests from consumers, according to the company. The treats cover the gamut of Zignature’s complete-and-balanced formulas, with each formula now including a dry food, a wet food and a matching treat.

Petcurean revamped its GO! SOLUTIONS line, adding 14 new wet dog and cat food formulas to complement its existing dry formulas. The collection of corresponding wet and dry diets is meant to support combination feeding and add variety. The wet diets feature stew and pâté formats, as well as a new minced format for cats and a shredded format for dogs.

Some brands are striving for “raw” nutrition by adding freeze-dried diets and treats. 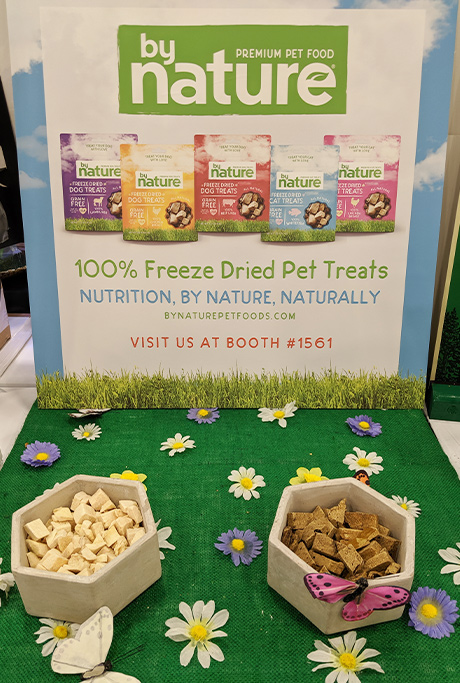 Grandma Lucy’s unveiled Moxie during the show, an entirely new line of pet food that is 100% freeze-dried with whole fruits and vegetables mixed in. Moxie dog and cat foods are grain-free, high-protein (93%) diets featuring freeze-dried, human-grade beef, chicken or turkey. The diets are also minimally processed in small batches, another processing trend seen at the show.

Spot Farms exhibited three 100% freeze-dried, limited-ingredient dog treats at the show, including organic chicken, cage-free turkey and duck. The ingredients are also human-grade, according to the company.

Perhaps one of the most prominent trends seen in the New Product Showcase section at SuperZoo was with processing methods for pet food and treats. Many brands have begun to market their products as “small-batch processed,” “minimally processed” or “gently air-dried,” to name a few, presumably to communicate transparency and an increased bioavailability of nutrients in the formulas. 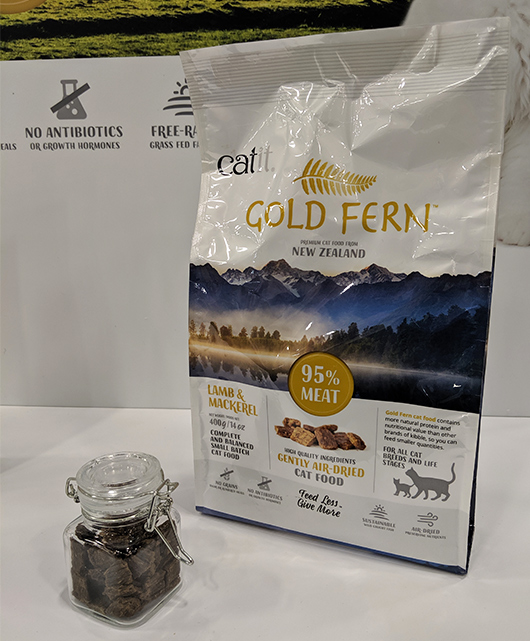 Gently air-dried is also a processing method being utilized by many brands.

Canadian company Zeal showcased its gently air-dried diets for dogs, which include 96% of protein from natural animal meat and organs and are grain-free.

Plato Pet Treats drew attention to the fact that the company has been air-drying its dog treats since 2006, taking extra time to air dry them in batches to help retain more of the foods’ inherent nutrients and to maximize palatability.

A number of pet brands have released full- and broad-spectrum cannabidiol (CBD) products over the past year as the therapeutic benefits of the plant have taken the market by storm, although the regulatory environment is still somewhat unclear. 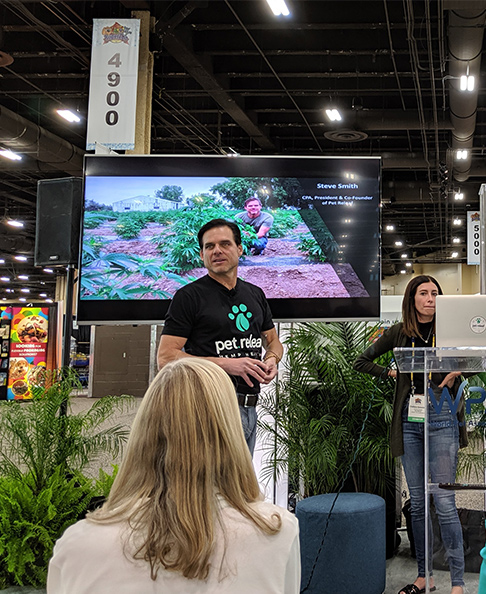 Steve Smith, CEO of Pet Releaf, presented “Current State of CBD and Hemp Legalization and Legislation” during the show, in which he said the US Food and Drug Administration is on track to set clearer standards for the production of hemp-based pet industry products. Smith is a member of the board consulting with the FDA to develop fair standards for safety and quality for these products.

High-protein is not necessarily a new trend in the pet food and treat industry, but it has continued to grow as consumers pay closer attention to labels and demand higher quality ingredients.

Blue Buffalo released its Carnivora line of “optimal prey nutrition,” in which 90% of protein is animal-based. Each grain-free diet is formulated with a combination of animal sources, such as its Woodland blend for adult dogs, which includes dried and fresh raw chicken, organs, turkey, saltwater fish and duck. The brand features Prairie, Coastal and Woodland formulas for dogs, as well as Coastal and Woodland formulas for cats.

Essence, a relatively new brand from Pets Global, released a line of limited-ingredient diets for dogs and cats, each with 85% animal, fish or protein ingredients. The grain- and legume-free diets, Landfowl Recipe, Ocean Recipe and Ranch Recipe, are available in wet and dry formats for dogs. 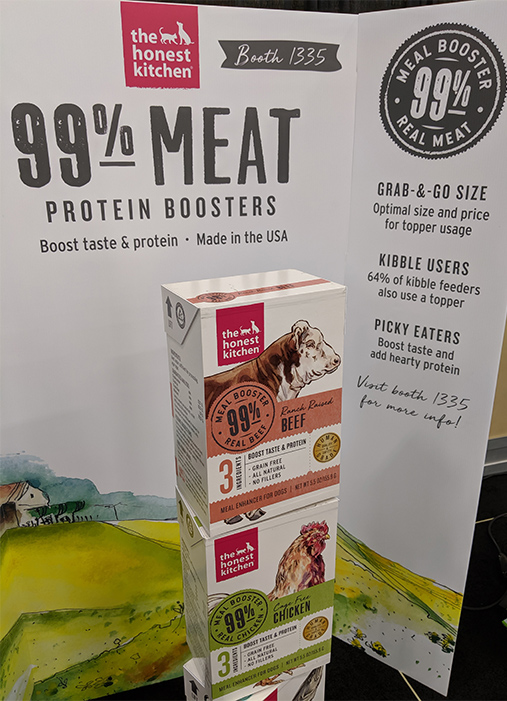 Aside from traditional proteins, insects and nutritional yeast have been utilized in new complete-and-balanced diets for dogs, appealing to more sustainable “animal” proteins that still offer optimal nutrition.

Jiminy’s, a pet treat manufacturer using crickets as a sustainable source of protein, developed its first insect protein-based dog food in two formulas, Good Grub and Cricket Crave, which are manufactured in small batches in the US. The diets are hypoallergenic and sustainable, according to the company.

Wild Earth, maker of the koji-protein dog treat, debuted its vegan dog food formula, a complete-and-balanced diet incorporating nutritional yeast as its main source of protein. The dog food, which offers 31% protein, requires fewer resources for processing compared to traditional animal proteins, and is highly scalable, according to Wild Earth.

Finally, pet food and treat brands took this opportunity to present a fresh face with new package designs and branding.

PetGuard redesigned its packages and logo to appeal to a wider breadth of consumers, from Millennials to Baby Boomers. The new designs are still featuring images of real pets on the packages to allude to the old packaging. 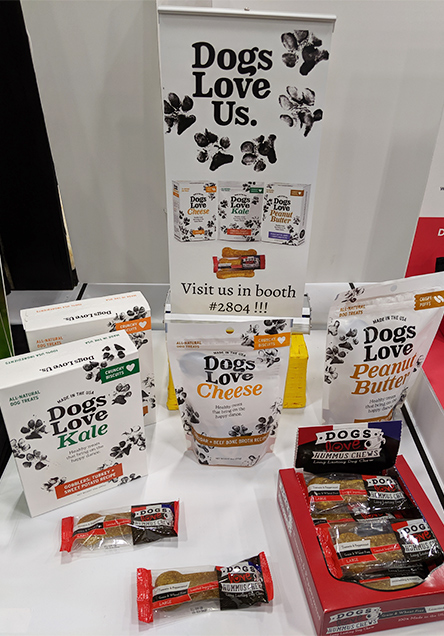 Dogs Love Kale officially rebranded to Dogs Love Us to communicate its range of dog treat offerings, which include hummus chews, kale, cheese and peanut butter treats. The new name accompanies a new logo and package designs as well.

Therabis showed off its new product packaging at the same time that it released its best-selling Mobility formula soft chews for dogs, formerly only available as a powder supplement. The new package designs include all the company’s hemp-infused dog and cat products.